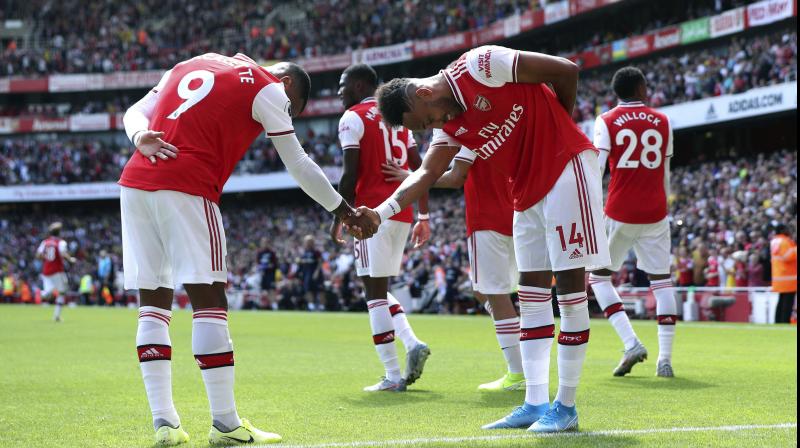 Aubameyang had netted the only goal in last weekend's win at Newcastle and he emulated that crucial contribution with another decisive strike at the Emirates Stadium. (Photo: AP)

London: Pierre-Emerick Aubameyang was Arsenal's match-winner again as the Gabon forward sealed a 2-1 victory against Burnley to extend his side's perfect start to the Premier League season on Saturday.

Aubameyang had netted the only goal in last weekend's win at Newcastle and he emulated that crucial contribution with another decisive strike at the Emirates Stadium.

It was an encouraging afternoon for Arsenal manager Unai Emery as his widely written-off team continued to bounce back from their dismal end to last season.

Failing to finish in the top four and losing the Europa League final against Chelsea robbed Arsenal of a Champions League place and led to a summer of recriminations as fans vented their frustrations.

But Emery has quietly assembled a more vibrant squad than he had in his troubled first campaign.

With two successive wins to start the season for the first time in 10 years, the early signs are promising for Arsenal ahead of sterner tests against Liverpool and Tottenham in their next two games.

As well as goals for Arsenal's two main strikers, there was a virtuoso performance from on-loan Real Madrid midfielder Dani Ceballos, who had two assists in his first start.

Club record signing Nicolas Pepe impressed after coming off the bench at half-time and although former Chelsea defender David Luiz was hardly rock solid on his debut, Emery's back four did enough to keep Burnley at bay.

Mesut Ozil was again absent from the Gunners squad after the German midfielder was ill earlier this week.

Ozil missed the Newcastle match because of "further security fears" after being involved in a carjacking incident with team-mate Sead Kolasinac in July.

But Ozil's absence wasn't a hinderance against a Burnley team who suffered their eighth successive loss at the Emirates.

Lacazette, back from an ankle injury that meant he was only a substitute at Newcastle, came close to putting Arsenal in front when he met a Sokratis flick with a close-range header that Nick Pope tipped over.

It was only a temporary reprieve for Burnley as Emery's side took the lead from the resulting corner in the 13th minute.

Ceballos's corner reached Lacazette at the near post and he showed impressive strength to hold off Erik Pieters as he turned away from a gaggle of Burnley defenders, his determined effort sending him slipping to the turf but not before he guided his shot through Pope's legs.

Ceballos showed a deft touch and quick feet to escape the attentions of his marker, drawing a huge cheer from the Arsenal fans who are already comparing him to Gunners great Cesc Fabregas.

Reiss Nelson squandered a chance to double Arsenal's lead when he fired too close to Pope, who also denied Matteo Guendouzi after another attack sliced through the Burnley defence.

But Burnley drew level in the 43rd minute when Dwight McNeil's shot deflected to Barnes and he took advantage of Arsenal's sloppy marking to poke home from close range for his third goal of the season.

Nelson had a goal ruled out for offside against Nacho Monreal moments later in what proved to be the young winger's last contribution before he was replaced by Pepe at half-time.

Pope was in fine form and he pushed away Ceballos's shot from the edge of the area, but even the Burnley keeper couldn't stem the tide forever.

In the 64th minute, Ceballos tenaciously won possession and found Aubameyang, who accelerated towards the Burnley area.

With Burnley's defenders backing off, Aubameyang had time and space to drill a blistering strike past Pope, sparking a fevered touchline celebration from Emery as Arsenal's early-season momentum gathered pace.