'Messi always gets us out of trouble', says Ernesto Valverde

Messi scored twice in the space of five minutes later in the first half to put Barca at ease. 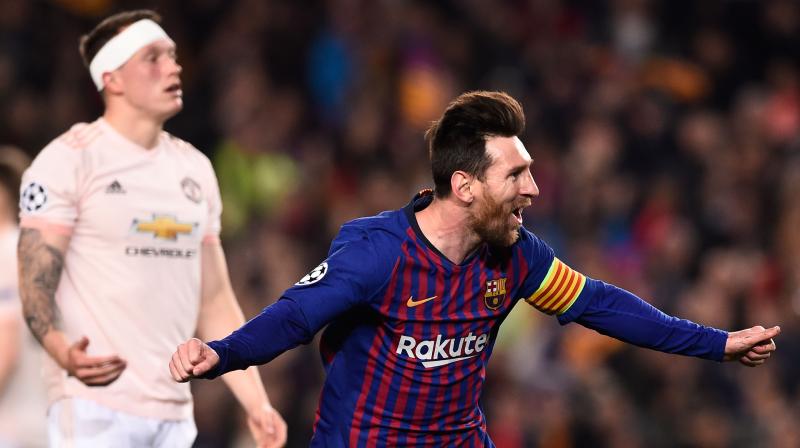 Barcelona: Barcelona coach Ernesto Valverde praised Lionel Messi for settling his side down after a nervy start against Manchester United and inspiring the Catalans to a 3-0 victory to reach the Champions League quarter-finals.

Marcus Rashford struck the crossbar for the visitors in the second minute at the Nou Camp but Messi scored twice in the space of five minutes later in the first half to put Barca at ease.

“Messi always gets us out of trouble and we’re not going to apologise for having him,” Valverde told a news conference.

“Leo always turns up in the important games, not just in the big moments but throughout the whole game. He is always capable of scoring but he also drives the team’s attack.”

Valverde said his side were relieved to finally hurdle the quarter-final barrier after three successive exits in the last eight, particularly after last season’s 3-0 second-leg defeat to AS Roma after winning the first leg 4-1.

“We had a lot of hope for this tie, it was a long time since we have been in the semi-finals and we had a very painful defeat last year,” he said.

“You never know what can happen in football, they [United] have a very good team and they could have caused us problems, so we made sure we were focussed and played with intensity so we would make it through.”

“With the quality they’ve got, the front three they’ve got, and players they can bring on like Dembele and Malcom, I wouldn’t bet against them,” Solskjaer said.

“They would be favourites to win the whole tournament.”

He added Messi’s majestic display underlined why is he regarded as the best player in the world alongside Cristiano Ronaldo.

“He’s an exceptional talent, him and Cristiano have been the best players in the world the last decade and he showed why we think that and why this team have won the Champions League so many times,” added the Norwegian.

“If you give him space and time around the goal he’ll create and score goals. Whenever he gets the ball around the box he will be decisive and unfortunately for us he was the winner for them.”