The Reds travelled to northern Portugal in a strong position going into Wednesday's second leg after a 2-0 win at Anfield last week. 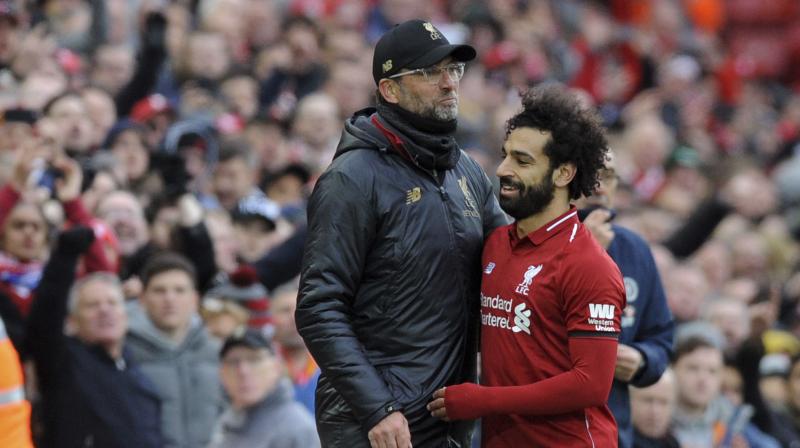 The Premier League leaders have stretched their unbeaten run to 16 games and made it seven wins on the bounce by seeing off Chelsea 2-0 on Sunday. (Photo: AP)

Porto: Liverpool are on the brink of a place in the Champions League semi-finals in what could turn out to be a dream season, but Jurgen Klopp warned his team still have a fight on their hands to finish the job in their quarter-final tie against FC Porto.

The Reds travelled to northern Portugal in a strong position going into Wednesday's second leg after a 2-0 win at Anfield last week, when Naby Keita and Roberto Firmino both scored.

Since then, the Premier League leaders have stretched their unbeaten run to 16 games and made it seven wins on the bounce by seeing off Chelsea 2-0 on Sunday.

Little wonder the excitement is building with Klopp's side still tantalisingly in with the chance of doing the double of Premier League and Champions League, the kind of success not enjoyed at Anfield since the early 1980s.

However, there was no hint of complacency from the Liverpool manager as he spoke at the Estadio do Dragao on Tuesday.

"It is so far a very positive season, that is why we are here, but we are not here to celebrate our situation," he said.

"We are here to go to the next round, because the season is not finished. We have to fight really hard.

"Porto won all their home games so far. The atmosphere in the stadium will be more Porto-dominated, that's clear -- they will try to have a kickstart in the game, so that is what I am thinking about and not about how good our season was until now."

Porto's impressive form at home in Europe this season includes a win after extra time against Roma in the last round, but Klopp's side do have happy recent memories of visiting this ground -- Sadio Mane scored a hat-trick in a 5-0 romp in the last 16 here a year ago.

"The result last year was maybe a bit of a false result," warned James Milner, who expects a hostile welcome from the home crowd of nearly 50,000 on Wednesday.

"When we got Porto, some of the talk in the media I would have taken it as pretty disrespectful if I were Porto.

"They've got a great European history and are used to winning trophies. There is going to be a special atmosphere so it is important how we start the game and that we nullify that."

If they can, they will march on to the semi-finals as Klopp searches for his first trophy as Liverpool manager.

The flip side is that even harder tests are likely to come if they do progress, while they could conceivably win all their remaining Premier League matches and still miss out on the title to Manchester City.

Best in the world

For now their form is such that Porto coach Sergio Conceicao was full of praise when he spoke earlier on Tuesday.

"They are everything I like about football. I like the way they play, the way they are with the ball and without it," Conceicao said.

"In my opinion, a lot of the time just now they are the best team in the world." Klopp -- who has Jordan Henderson fit after an ankle problem and Joe Gomez in his squad but no Dejan Lovren -- said he took that comment as "a compliment, probably".

Porto have not made the semi-finals of this competition since they last won it in 2004 and, tellingly, Conceicao admitted the domestic league is his priority, with Porto currently level on points with leaders Benfica.

They remain hopeful, though, especially with captain Hector Herrera back from suspension along with veteran defender Pepe.

"Here at home normally we are a very strong team with our fans behind us. I really believe that tomorrow will be no exception and we will be able to go out with that positive energy and hurt Liverpool," said the Mexican Herrera.