Serie A: Ronaldo to miss Genoa match after UCL display

'I'm leaving him at home, he had played a lot and he needs to rest', Allegri told reporters. 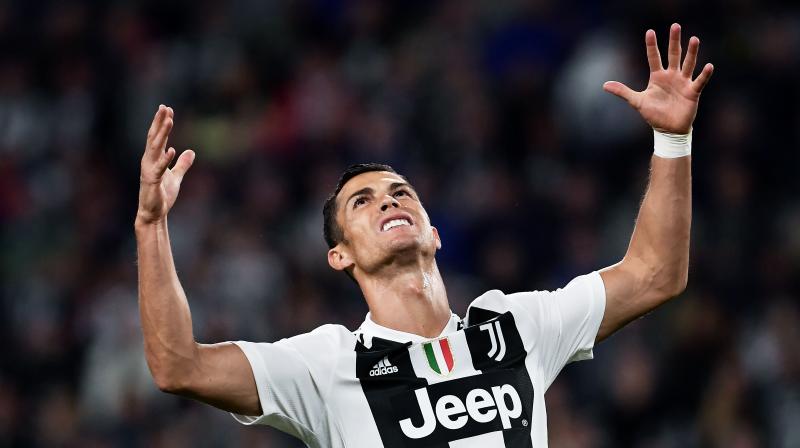 Juve will take on Ajax next month after Ronaldo scored a sensational hat-trick to overturn a two-goal first-leg deficit against Atletico midweek and win 3-2 on aggregate. (Photo: AFP)

Rome: Cristiano Ronaldo will miss Juventus' trip to Genoa after firing the Serie A side to the Champions League quarter-finals, coach Massimiliano said on Saturday.

"I'm leaving him at home, he had played a lot and he needs to rest. Right now it would be too risky to play him," Allegri told reporters.

"I don't need to convince him. We spoke about it yesterday, I explained my point regarding the fixtures between now and the (Champions League) quarter finals and he agreed."

Juve will take on Ajax next month after Ronaldo scored a sensational hat-trick to overturn a two-goal first-leg deficit against Atletico midweek and win 3-2 on aggregate.

The Portuguese openly taunted the Atleti fans in the stands during the post-match celebrations, but Allegri said he was not worried about UEFA banning his star player for the clash with the resurgent Dutch side.

"Everyone celebrated differently on Tuesday, there were 42,000 fans there and we could suspend them all (based on how they behaved)," he said.

"We are not afraid of a suspension that will not happen." Allegri can afford to drop Ronaldo in view of the Champions League quarters thanks to the 18-point lead his unbeaten side have at the top of Serie A ahead of their match with Genoa.

Ronaldo is facing rape allegations dating from 2009. In the latest development in the case, Las Vegas police requested a DNA sample as part of their investigation.

Ronaldo says he had a consensual relationship with a former model who lodged a complaint claiming she was raped at his hotel suite. AFP KHS