Coro set the league on fire last season with 18 goals to win the golden boot award. 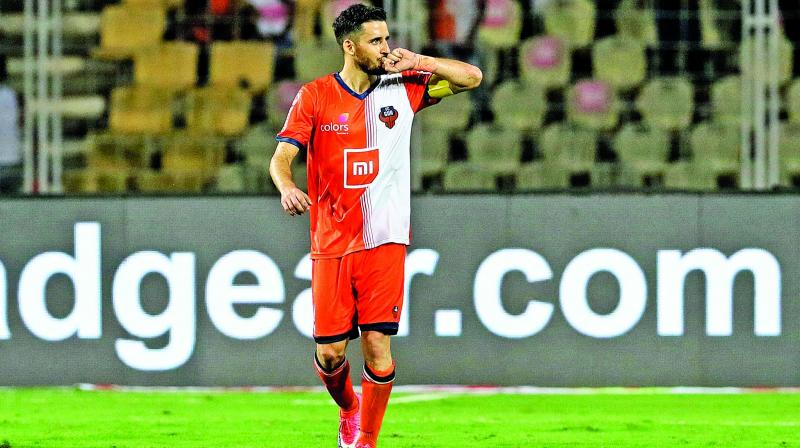 Mumbai Football Arena has been the happy hunting ground for FC Goa’s Spanish striker Ferran Corominas and he wants to score again here to help his team lift the maiden title on Sunday.

Fondly known as Coro, he has scored twice and assisted in a couple of goals as Goa has scored seven goals on this pitch this season conceding just one goal. However, those goals were against Mumbai City but Goa’s Sunday’s opponents are table toppers Bengaluru FC against whom Coro hasn’t been able to score and his team has lost both league games to Bengaluru. But Coro is determined to score on Sunday to help his team win.

“I haven’t been able to score against Bengaluru but we have got chances to score. We have to convert our chances and tomorrow is a different game. I am excited to play in the final,” he said here on Saturday.

“There is no pressure on me, I want to do what my team needs. Yes, I want to score to help my team win and lift the trophy,” he added.

Coro set the league on fire last season with 18 goals to win the golden boot award. He has been unstoppable this season too with 16 goals in his kitty and the 36-year-old is set to win golden boot award for the second consecutive year. The second best goal scorer playing the final is Sunil Chhetri who is way behind with nine goals to his name.

The Spanish genius pointed out the contribution from mid-field who made the balls and forwards who made dummy runs and defenders who set up the moves to make his task easy.

“Everyone has contributed in scoring goals leading to wins. The greatest strength of the team lies that it is a team and we are not relying on individual players,” he said.

Along with leading the goal-scoring charts, he is also the second best when it comes to assists with seven of them to his name in the campaign so far.