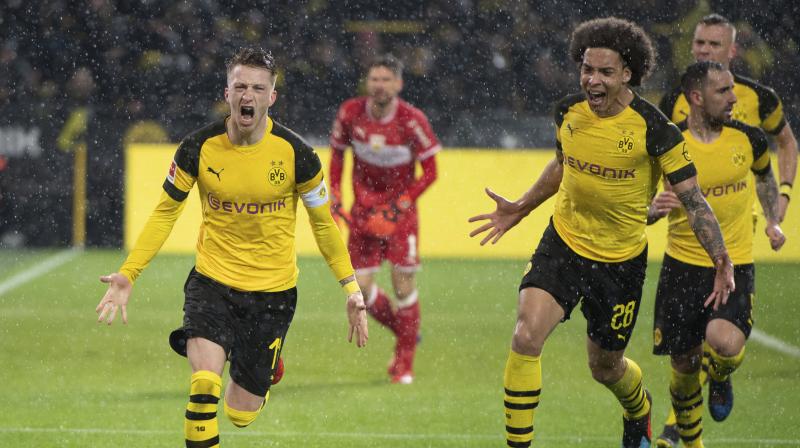 Ivorian striker Salomon Kalou twice breached Dortmund's defence in a poor first half by the visitors, who have taken 12 points from a possible 21 in their last seven league games. (Photo: AFP)

Berlin: Marco Reus admits Borussia Dortmund are struggling to pick up wins in the Bundesliga title race, even as his late goal sent them top by sealing Saturday's dramatic 3-2 victory at Hertha Berlin.

Dortmund's win leaves them three points clear of defending champions Bayern Munich, who must bounce back from their Champions League exit to Liverpool by beating Mainz on Sunday.

Ivorian striker Salomon Kalou twice breached Dortmund's defence in a poor first half by the visitors, who have taken 12 points from a possible 21 in their last seven league games.

Hertha had defender Jordan Torunarigha and substitute striker Vedad Ibisevic sent off in the final few minutes of a bad-tempered match.

"The most important thing was the three points we took," Dortmund captain Reus told Sky. "We dominated the second half and played better football the first.

Kalou capitalised on a mistake by Dortmund goalkeeper Roman Burki with just four minutes gone to give Hertha the lead.

Delaney equalised by charging through a huge gap in midfield and firing home, his 14th-minute shot deflecting off Hertha defender Karim Rekik.

Kalou restored Hertha's lead by drilling home a penalty after a Julian Weigl handball 10 minutes from the break.

With five minutes left, Torunarigha was sent off for a second yellow card after fouling Dortmund defender Achraf Hakimi, just before Delaney hit the crossbar.

With time running out and Dortmund growing desperate after wasting a string of chances, Sancho supplied the cross for Reus to convert to claim the three points. In the dramatic closing moments, Kalou's replacement Ibisevic was also dismissed for throwing the ball in the face of the Dortmund goalkeeper.

The Dutchman has been hastily hurried back for his third stint in charge after predecessor Domenico Tedesco was fired on Thursday, two days after the 7-0 thrashing at Manchester City in the Champions League.

However even Stevens, who lifted the UEFA Cup as Schalke coach in 1997, could not arrest their dreadful run, which has seen them fail to win any of their last eight league games.

Timo Werner stabbed home Leipzig's winner with 14 minutes gone in Gelsenkirchen after Yussuf Poulsen had rattled the crossbar. The defeat saw Schalke drop to 15th in the table, leapfrogged by Augsburg who enjoyed a 3-1 comeback win at home to second-from-bottom Hanover.

Sergio Cordova equalised for Augsburg to cancel out Hendrik Weydandt's shock early goal for Hanover to make it 1-1 at the break. Midfielders Jonathan Schmid and Andre Hahn made sure of the win with goals in the last 12 minutes to see Augsburg home and leave Hanover winless in their last 25 away league games, dating back to October 2017.

Stuttgart, in 16th, moved to within three points of Schalke with a 1-1 draw as central midfielder Steven Zuber equalised against Hoffenheim, the club he is on loan from, on 66 minutes.

Zuber's superb goal cancelled out Andrej Kramaric's opener for Hoffenheim three minutes before the break -- the Croat notching his 13th league goal this season, having scored four goals in as many league games after two against Nuremberg last weekend.

Wolfsburg coach Bruno Labbadia has announced he is leaving at the end of the season, due to a personality clash with sports director Jorg Schmadtke, but the off-field politics played no part in a 5-2 trouncing of Fortuna Duesseldorf.

Towering Dutch striker Wout Weghorst scored a hat-trick in just over half an hour as Fortuna were floored by three goals in five minutes midway through the second half with Weghorst netting either side of a Robin Knoche goal.