Bengaluru have edge over FC Goa

Ferran Corominas (Coro) scored a hat-trick in the match. 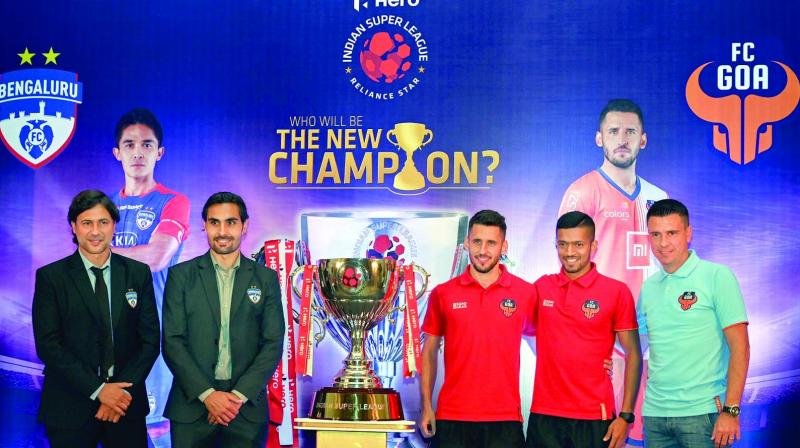 Mumbai: Bengaluru FC will start as favourites in the mouth watering Indian Super League final clash against FC Goa at the Mumbai Football Arena on Sunday. The Gaurs may have dominated the campaign so far by scoring most goals (41) and defending well to maintain top goal difference. But they lost both games to table toppers Bengaluru FC and ended up second in the league despite sharing 34 points with the Blues.

Both teams have been in the final once but ending up on losing side against Chennaiyin FC. For sure there will be third new champion in the ISL after ATK and Chennaiyin won it twice each.

Goa has won just once against Bengaluru which was the first ever encounter between these two sides in total four meetings. Ferran Corominas (Coro) scored a hat-trick in the match. He has scored most 16 goals in the competition and will be the key. Goa has relied heavily on Spanish striker Coro and other foreign players like Ahmed Jahouh, Hugo Boumous and Edu Bedia.

Bengaluru scored 29 goals in the league stages which was second highest and came back from 2-1 loss to win 4-2 on aggregate against North East United in the semi-finals.

Goa had relatively easy path to final, hammering Mumbai City 5-1 before losing 1-0 at home to advance on 5-2 aggregate. Both teams had exact same number of wins, draws and losses.

After going eleven games unbeaten in the first half of the campaign, BFC did go through a rough patch towards the end. However they were almost assured of play-off spot and used last few games to test their bench strength and give much needed to rest to their stars.