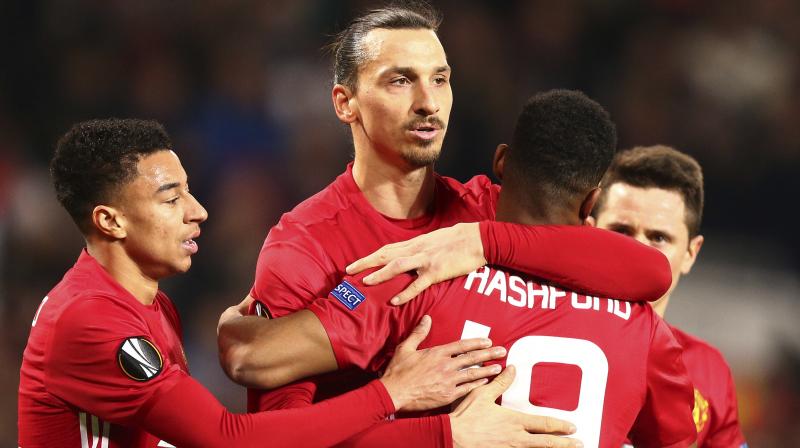 The former Sweden international has scored 17 times in 14 games against the French club. (Photo: AP)

Manchester: Zlatan Ibrahimovic and Edin Dzeko, two of the most prolific strikers in Europe, scored hat tricks to push Manchester United and Roma to the brink of the Europa League last 16 on Thursday.

With a deflected free kick, a tap-in, and a penalty, Ibrahimovic helped United dispatch Saint-Etienne 3-0 at Old Trafford in the first leg of their last-32 match, with his first hat trick for the English club and the 17th of his illustrious career.

The pre-match focus had been on the family reunion between the Pogba brothers, Paul (United) and Florentin (Saint-Etienne), but Ibrahimovic became the center of attention once again - as he often does against Saint-Etienne. The former Sweden international has scored 17 times in 14 games against the French club, with his previous 14 goals coming when playing for Paris Saint-Germain.

"Every time I played against them, with luck and with a good game, there have been goals," Ibrahimovic said.

Dzeko became the leading scorer in this season's competition - on eight goals - with his second-half hat trick for Roma in a 4-0 win at Villarreal.

It is 28 goals in all competitions for Dzeko, who scored in the 65th, 79th and 86th minutes to add to Emerson Palmieri's opening goal for the Italian side.

United and Roma are the two favorites for the Europa League and that's no real surprise, given they are fired by strikers who have scored 51 goals between them this season.

The margin of victory may afford United manager Jose Mourinho the luxury of resting some key players for the second leg on Wednesday, with the game coming four days before United plays Southampton in the English League Cup final.

Paul Pogba won the battle of the brothers, running the game from center midfield and almost scoring when he headed against the bar from the edge of the six-yard box. Florentin, older by three years, ended the game early when he was taken off injured in the 79th - but only after being given an embrace by his more renowned sibling.

It was a family catch-up for the Pogbas at Old Trafford, with their mother and other brother, Mathias, watching from a corporate box wearing jerseys with United's colors on one half and Saint-Etienne's colors on the other.

The scoreline was harsh on Saint-Etienne, which created plenty of chances but was let down by poor finishing, particularly in the first half after United started sloppily.

"It was down to a lack of concentration," Mourinho said. "I had the feeling immediately in the dressing room: Too noisy, too funny, too relaxed. Then my assistants had the feeling in the warm-up, with some of the guys not really focused."

A look at some other games:

This was Shakhtar's first competitive outing since Dec. 12, but even the long break couldn't halt the Ukrainian team's momentum in the Europa League.

Shakhtar, the winner of the UEFA Cup - the precursor to the Europa League - in 2009, earned its seventh straight win in the competition when debutant Blanco Leschuk scored at the end of a 27th-minute counterattack.

Shakhtar was the only team to go through qualifying with a 100 percent record.

Tottenham's attack is malfunctioning, just when the big games are piling up for the English club.

It's now one goal in four games for Spurs after a loss at the eighth-place team in the Belgian league, with Gent's winner coming from Jeremy Perbet in the 59th.

England striker Harry Kane hit the post for Spurs but finished the game with a knee injury.

Federico Bernardeschi celebrated his 23rd birthday with the winner for Fiorentina, leaving Moenchengladbach still without a home win in Europe after dropping down from the Champions League.

Bernardeschi got up from being fouled on the edge of the area and curled a free kick around the wall and into the top corner.

Alexandre Lacazette enhanced his burgeoning reputation by scoring two of Lyon's goals in a 4-1 win at AZ Alkmaar, while Rostov capitalized on the sending-off of Tiemoko Konate at 1-0 to beat Sparta Prague 4-0.