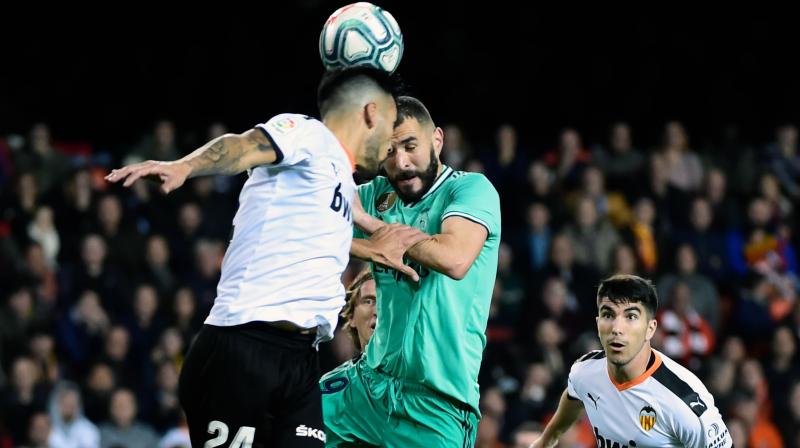 Real Madrid snatched a 1-1 draw at Valencia in La Liga on Sunday thanks to a strike from Karim Benzema that was aided in the most unlikely fashion by a header from goalkeeper Thibaut Courtois in the dying seconds. (Photo:AFP)

VALENCIA: Real Madrid snatched a 1-1 draw at Valencia in La Liga on Sunday thanks to a strike from Karim Benzema that was aided in the most unlikely fashion by a header from goalkeeper Thibaut Courtois in the dying seconds.

The Belgium keeper rushed upfield for Toni Kroos’s last-gasp corner, met the delivery with a powerful header that his opposite number Jaume Domenech could only parry and then saw Benzema steer the loose ball home.

The 95th minute equaliser allowed second-placed Real to go level on 35 points with leaders Barcelona before they visit their arch rivals in the rescheduled ‘Clasico’ on Wednesday.

Spanish forward Carlos Soler had put Valencia ahead in the 78th minute of a tense and tight game, meeting a cut-back from Daniel Wass and lashing into the net from close range.

Real substitute Luka Jovic looked to have levelled in stoppage time but the effort was ruled out for offside.

The visitors, however, refused to cave in and the late intervention from Courtois helped salvage a point that preserves his side’s long unbeaten run in all competitions, which has been stretched to 11 games.

“Courtois decided to come up for the corner and that shows that we always want more,” said Real coach Zinedine Zidane.

“We deserved to get the draw because we made a huge effort in the game. This is Real Madrid, where you never give up. We kept believing we could score and in the end we did.”

The goal prevented Valencia from climbing up to sixth in the standings and they were instead left in eighth on 27 points.

“We came here looking for the three points but we were punished by Valencia’s goal and this point tastes like very little,” added Real captain Sergio Ramos.

“But we were up against a side in great form and this point keeps us level with Barca and now we are focusing on the ‘Clasico’ and getting all three points there.”

Barca’s 2-2 draw at Real Sociedad the previous day meant Real would have gone two points clear at the top of the standings with victory at Valencia, although they were up against a side who have hit form after a stop-start campaign.

Valencia had won their previous three games and in midweek had celebrated a momentous 1-0 win at Ajax Amsterdam which took them into the latter stages of the Champions League for the first time in seven years.

Real also had to contend with a poor recent record at Mestalla, where they had only won on one of their previous five league visits.

Zidane opted to rest midfield anchor Casemiro for the first time this season, as the Brazilian would have been suspended from the trip to the Camp Nou if he had picked up a yellow card.

Real coped well in his absence, hemming Valencia into their own half in the first half and it took a fine save from keeper Domenech to prevent Kroos from putting Real ahead in the first half, while Benzema also came close with a header.

“With everything we did in the game I think we should have scored a few more goals,” said Zidane.

“The point feels like a small reward. In the end, we got an important result but it doesn’t feel that way because we played so well in the first half.”