Fifa U-17 World Cup: USA up against Paraguayan flair

The South Americans boast of a potent attacking line, scoring 10 goals in their three group matches and 16 in the qualifiers, second only to Brazil. 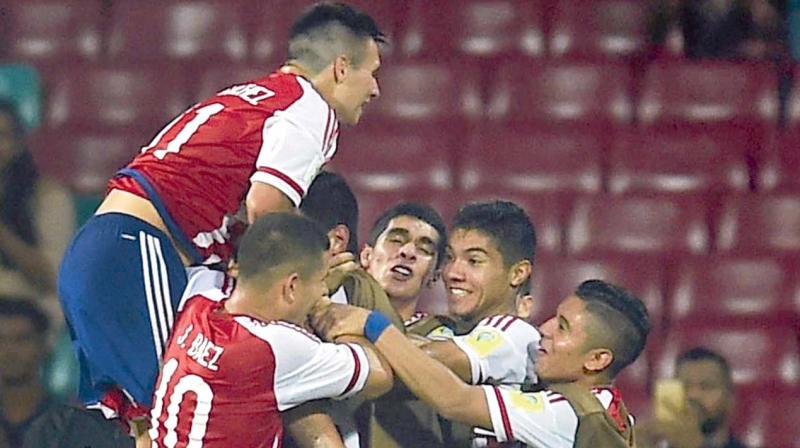 New Delhi: Paraguay’s scintillating goal-scoring ability will be as much under scrutiny as USA’s mental aptitude in the Under-17 World Cup’s second Round of 16 stage match on Monday.

The South Americans boast of a potent attacking line, scoring 10 goals in their three group matches and 16 in the qualifiers, second only to Brazil.

Their group stage wins were high scoring affairs, 3-2 against defending champions Mali, 4-2 against New Zealand and 3-1 against Turkey, all entertaining contests.

Attacking in numbers, they have Anil Vega, Giovanni Bogado, Fernando Cardozo, Alan Rodrgez and Antonio Galeano among seven who scored in the group stages.

Paraguay coach Gustavo Morinigo will expect his team to carry the momentum forward.

Apart from Los Guaranies’ offensive might, the Americans will arguably be under greater pressure to perform after their senior men’s team failed to qualify for the 2018 Russia World Cup.

The tricky Paraguayans, who have a knack of netting late goals, will keep their defenders on their toes.

Paraguay have created scoring opportunities with aplomb but are prone to conceding while marching forward, which will provide hope to their opponents.

USA coach John Hackworth will make his players aware that if they can withstand pressure, opportunities on the break will come their way. The link-up play between the midfield and attack will be crucial, particularly in swift breaks.

Their defence, led by James Sands and Chris Durkin, has been steady, save a misadventure against Colombia, conceding two in the second half to go down 1-3.

It was particularly disappointing for the Stars and Stripes as they came into the match without conceding a goal.

The loss not only dampened an optimistic feeling among the squad, which soared after victories over India and Ghana, but also made them qualify as a ‘lucky loser’, demoting them from group top position. They have to quickly dust off doubts arising from their Colombia flop show and will count on the positives. The team have shown potential and a return to the Jawaharlal Nehru Stadium in New Delhi, the site of their first two group games, is comforting.

Hackworth will demand nothing less than a sturdy defensive effort to keep the game close, which will allow their formidable offensive quartet of Josh Sargent, Andrew Carleton, Ayo Akinola and Timothy Weah a sniff at susceptible opposition defenders.