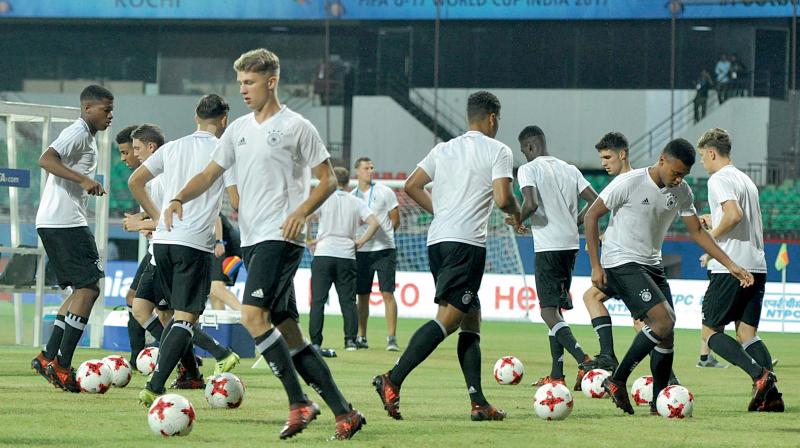 New Delhi: Germany may command added respect as world champions at the senior level but are yet to live up to their billing in the Under-17 World Cup, and Colombia will fancy their chances in the opening Round of 16 match on Monday.

The Europeans won two of their three Group C matches, similar to their opponents, beginning with a 2-1 victory against Costa Rica, finishing with a 3-1 margin over Guinea, but hardly looking convincing in both the triumphs.

A 0-4 decimation by Iran dented their ‘air of invincibility’, consigning them to second place in the group and putting them under pressure. It also gives opponents hope of adopting a bolder approach against them.

The Germans have neither set the tournament on fire with their offensive display, scoring five in the group stage, nor have they managed to keep clean sheets, conceding six, advancing with a negative goal difference.

They struggled to break down Costa Rica in their tournament opener despite controlling the flow of action, only squeezing through with a late winner.

Their graft was also visible against an energetic Guinea side, who refused to be cannon fodder.

Hamburg forward Jann-Fiete Arp, with two goals, has sparkled but needs greater support from his fellow attackers against Colombia.

However, offence will be the least of coach Christian Wueck’s worries.

He first has to find a way to plug their vulnerable defence, which was exposed on several occasions by Iran’s Younes Delfi and Allahyar Sayyad.

Restrepo would surely have noticed Germany’s defensive limitations, the huge space left untenanted between their central defenders and between midfield and defence.

Delfi and Sayyad made merry pushing into these gaps, making smart runs behind the backline to force the Germans into committing mistakes.

The technically-gifted South Americans will back themselves to repeat the trick, Juan Penaloza being at the forefront of their attacks, playmaker Leandro Campaz pulling the strings from behind, with help from Santiago Barrero.

Penaloza has stood out as an inverted winger, playing on the right flank, cutting back to shoot with his left, scoring twice against India and once against USA.

His sharp left foot could well be the difference between the two sides as the Germans will match them in physicality and strength.

After a slow start in a 0-1 defeat against Ghana, Colombia’s campaign has gradually gathered pace. A battling 2-1 victory against a determined India was followed up with an impressive 3-1 result over USA.

They have grown in strength with each game. Having played two of their group games at the Jawaharlal Nehru Stadium here, Los Cafeteros also have a headstart over the Germans as far as familiarity with the conditions is concerned.