Ronaldinho, who has scored the maximum goals last season, came to the city to show his support for the game. 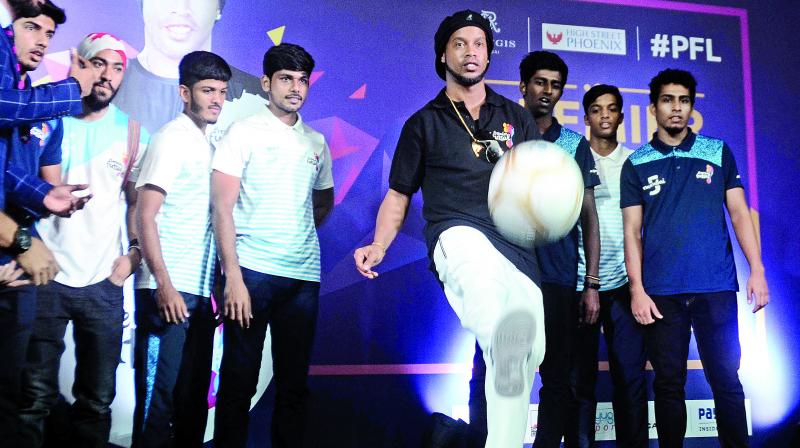 Come September, Mumbai is set to host the Premier Futsal for the first time. The skillful five-a-side event brought world stars like Ronaldinho, Ryan Giggs, Paul Scholes and Falcao to India last year after it was launched in Mumbai by Luis Figo.

Four cities will host the second season. The tournament will start at the NSCI Dome in Worli from September 15 after an opening ceremony. Later, it will travel to New Delhi and Bengaluru before culminating in Dubai (United Arab Emirates) for the semi-final and final. The concluding ceremony will be in Dubai on October 1.

Futsal is the shorter version of football with five players each, rolling substitutions, smaller size ball, no off-side rule, side boundaries and 20 minutes each half. Many greats like Ronaldinho ventured into football by playing Futsal. In Mumbai, the game has thrived for decades as it involves a smaller ground like a basketball court and can be played on terraces and in the streets, etc.

This year they plan to go bigger and better. Ronaldinho, who played only two matches in the first season but left maximum impact with five goals in one game, announced his three-year association with Premier Futsal in Mumbai on Friday.

He gave fans, who were waiting for hours at a mall in Lower Parel, a glimpse of what they can expect in the fast paced, skillful event from quality players in September.

“I enjoyed and loved playing in India last year and entertaining the audience. I love the food and the warmth of the Indian people. Futsal has been an important part of my life ever since I started indulging in the sport as a young kid,” he said.

“Premier Futsal has quickly become the biggest Futsal event in the world, and I am here to support this league in the long term, and make it a huge success globally. Now with Season 2 of the tournament, we want to break the glass ceiling and set the benchmark for sporting leagues across the world. We want to inspire more and more youngsters to take up the sport, and all of our efforts, especially the Launch Pad are directed towards bringing the youth closer to the game,” said the winner of the former Ballon d’Or and the 2002 FIFA World Cup.

Rajesh Kabra and Hemant Kabra, promoters, RR KABEL Group, are Mumbai 5’s team owners of the league. “Premier Futsal has seen significant traction in its first edition and has gained momentum amongst its TG. It gives us immense pleasure to be able to facilitate the growth of the unique sport in the city of Mumbai through this association and enable it to be an integral part of one of India’s fastest growing sports properties,” Kabra said.

Former Indian star Bhaichung Bhutia was also set to announce his association with Premier Futsal on Friday, but he backed out at the last-minute due to his partnership with AIFF which doesn’t recognise the League.

Premier Futsal has also collaborated with the Dubai Sports Council, which takes the tournament beyond the Indian territory. The six teams will play each other seven times before the semi-finals which will also be held in the port city. All the matches will be broadcasted live on Sony Network.

Dinesh Raj, managing director, Premier Futsal said, “The fixtures for this year’s tournament have been scheduled keeping in mind the imparting of a wholesome Futsal experience to sports enthusiasts not only in India but across the world. We envision Premier Futsal to be one of the leading global sports properties in the coming years and the current expansion and diversification of Premier Futsal is in line with this vision of ours.”

Buzzing NSCI Dome
Mumbai will be buzzing with sports activities with the NSCI Dome in Worli set to host the concluding part of ongoing Ultimate Table Tennis League later this month. It will be followed by Vijender Singh’s professional bout against Chinese boxer Zulpikar Maimaitali for a double title fight on August 5. Pro Kabaddi League matches are also scheduled here in the later part of August, followed by Premier Futsal at the same venue in mid-September. NSCI Dome also hosts the Mumbai franchise games in the Premier Badminton League.