'We'll not only defend but also show our superiority': Ter Stegen

The Catalans hold a 1-0 lead from the first game at Old Trafford from last week. 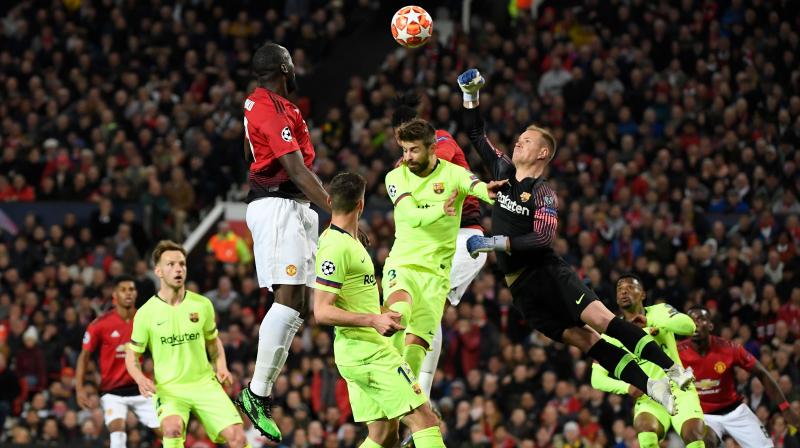 Barcelona have been knocked out in the quarter-finals three seasons running, throwing away a 4-1 first leg lead to lose 3-0 at AS Roma in the return and go out on away goals last year. (Photo: AFP)

Barcelona: Barcelona will try to dominate Manchester United in the Champions League quarter-final second leg on Tuesday, according to goalkeeper Marc-Andre ter Stegen.

The Catalans hold a 1-0 lead from the first game at Old Trafford from last week but Ter Stegen said on the eve of the return that Barca will not sit back and hope it was enough to progress.

“We don’t have a very big advantage,” the German told reporters Monday. “We want not only to defend it but also show that we are superior and we need to have a good game.

“We want to show that we are better than United and for that we have to beat them, and in our own way.

“Of course it’s important to keep a clean sheet, but we have to play with a lot of personality, like always, and dominate them.”

Barcelona have been knocked out in the quarter-finals three seasons running, throwing away a 4-1 first leg lead to lose 3-0 at AS Roma in the return and go out on away goals last year.

“The Roma defeat was tough but we’re here a year later and (now) we are in this moment,” added Ter Stegen.

“We don’t want it to happen again and for that we have to take it into account, but we have to look forward and try to get a good result tomorrow with our fans behind us.”

Barca coach Ernesto Valverde said Lionel Messi was fit to play after his knock in the first leg from Chris Smalling.

Messi and several other first team players were rested for the Catalans’ 0-0 draw at Liga bottom side Huesca on Saturday.

“Messi is fine after the blow he received and has no problems ahead of tomorrow’s game,” said Valverde.