The result lifted the Gunners two places up to fourth on 66 points from 33 games, one behind third-placed Tottenham Hotspur. 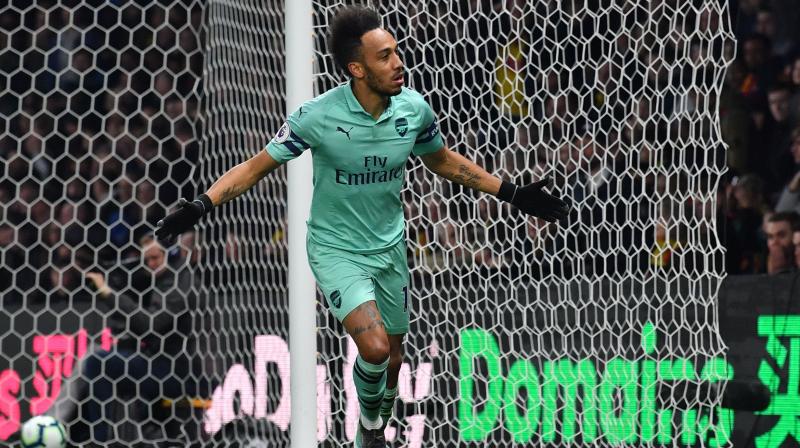 Arsenal are ahead of fifth-placed Chelsea, who have played a game more, on goal difference. Watford stayed 10th with 46 points. (Photo: AFP)

Arsenal boosted their hopes of a top-four finish in the Premier League after a bizarre 10th-minute goal by striker Pierre-Emerick Aubameyang gave them a 1-0 win at 10-man Watford on Monday.

The result lifted the Gunners two places up to fourth on 66 points from 33 games, one behind third-placed Tottenham Hotspur. Arsenal are ahead of fifth-placed Chelsea, who have played a game more, on goal difference. Watford stayed 10th with 46 points.

Arsenal manager Unai Emery was pleased with his team’s first away clean sheet of the season.

“A clean sheet is very important,” he told the BBC. “It is going to give us a lot of information, this match.”

The fast-paced clash took a decisive turn in a frantic one-minute spell early on, as Aubameyang found the back of the net in unlikely fashion before Watford striker Troy Deeney was shown a straight red card for elbowing Lucas Torreira.

The home side’s goalkeeper Ben Foster dwelled on Daryl Janmaat’s back pass for too long, allowing Aubameyang to close him down and block his attempted goalmouth clearance as the ball ricocheted into the back of the net.

Foster made no excuses for his howler.

“I’ve said sorry to the lads,” he said. “I tried to drag it on to my left and pass it out but before I knew it Aubameyang was bloody on me. He is too quick. In hindsight you have to get rid (of the ball) as quick as you can, even if it goes into row Z.”

Despite their numerical disadvantage, Watford kept pressing and missed a string of chances to draw level, having twice been denied by the woodwork as well as by some good saves from Arsenal keeper Bernd Leno.

The home side missed their best opportunity in the 80th minute when Arsenal substitute Ainsley Maitland-Niles slid in to block Andre Gray’s goal-bound effort after the Watford forward rounded Leno.

Aubameyang, Alex Iwobi and Henrikh Mkhitaryan also came close at the other end but Arsenal were forced to hang on in the closing stages with Watford throwing men forward.

The home team’s manager Javi Gracia praised his team for their fighting spirit in the face of adversity.

“We did a lot of things to try to win, a big effort,” he said. “We didn’t get any points but we played well. It was a difficult game with 10 men.”