Jose Mourinho had been left frustrated by Manchester United's recent run that had brought three draws in their previous four league games. 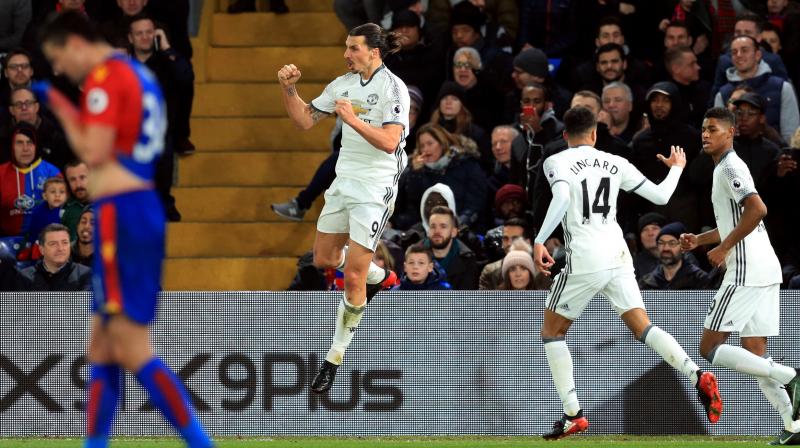 Mourinho had been left frustrated by United's recent run that had brought three draws in their previous four league games.

And when referee Craig Pawson turned down a strong United claim for a penalty and then ruled out a Juan Mata effort for offside after Crystal Palace's James McArthur had cancelled out Paul Pogba's opening goal, Mourinho appeared set for more disappointment.

But Pogba and Ibrahimovic combined for the decisive goal four minutes from time when the France midfielder set up his team-mate, who produced an excellent finish from a tight angle to silence Selhurst Park.

That ensured United remain sixth, six points off the top four, and turned the focus on Pawson's decision to ignore a possible handball by Ibrahimovic when he set up Pogba's goal immediately before half-time.

For the third time in less than a year, United fell foul of the London traffic, arriving at Selhurst less than an hour before kick-off.

Unlike on their recent visits to Tottenham and West Ham, the team's late arrival did not result in a delayed kick-off.

It was hardly the ideal preparation for Mourinho's team, however as they set about the task of building on the weekend home win against Tottenham.

And the visitors suffered another unwanted scare just five minutes into the game when Eric Bailly went down holding his left knee on his first Premier League start since damaging ligaments in his right knee.

The Ivorian was initially fit enough to continue and United's early dominance of the game allowed the defender, operating at right-back on this occasion, to ease his way back into the game before his departure early in the second half added to Mourinho's concerns.

The United manager had omitted Antony Martial from the matchday squad, while Henrikh Mkhitaryan is out until the turn of the year with an ankle ligament injury, prompting questions about whether United would have enough pace in the side to unsettle Palace.

A front three of Mata, Wayne Rooney and Ibrahimovic was always going to have to rely more on guile than speed, but the early signs were promising, with Rooney and Mata in particular combining well to set up a headed chance for the England captain.

That effort flew wide, and despite dominating possession, Mourinho's side struggled to build on that opportunity.

A strong run from Wilfried Zaha, anxious to make an impression against United after spending an unsuccessful two-season spell at Old Trafford, offered a hint of Palace's threat, drawing a crude challenge from Marcos Rojo that could have seen the United defender sent off.

Bobby Charlton was looking on from the stands to see if Rooney could score the goal that would equal Charlton's United record of 249 goals.

The United skipper came close in the 37th minute when he got in behind the Palace defence to collect Pogba's chip, but saw his shot on the turn saved by  Wayne Hennessey.

Pogba's controversial effort came immediately before half-time when Ibrahimovic appeared to use his arm to direct the ball into his team-mate's path allowing the France midfielder to score.

Then  after appearing to have taken control of the game, United were undone by a fine Palace move in the 66th minute that began with Joel Ward playing the ball towards Damien Delaney whose neat backheel sent McArthur clear inside the box to level.

United battled to fight back and were convinced they should have had a penalty when Ledley handled from Rojo's header before disputing the offside call that meant Mata's close range effort was ruled out.

But Ibrahimovic's late strike ensured it was Palace manager Alan Pardew who was left feeling most aggrieved.