The game was temporarily stopped twice in the first half by match referee following abuse from the stands, Goal.com reported. 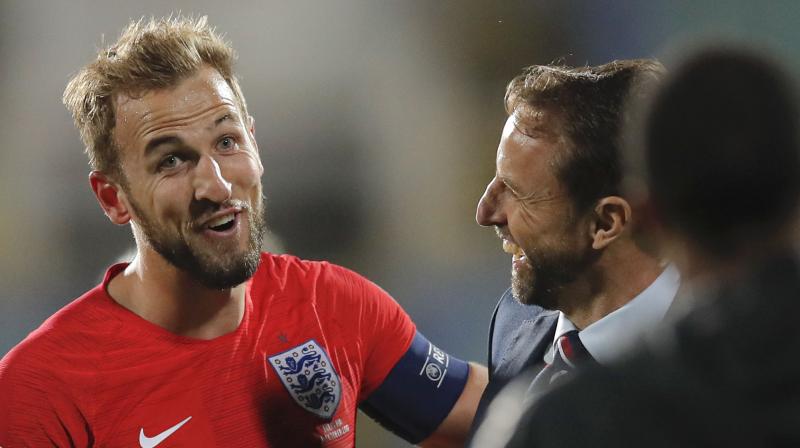 The match official was even seen discussing the matter with England skipper Hary Kane and an announcement was also made at the stadium. (Photo: AP)

Sofia: England football players were subjected to racial abuse during their Euro 2020 qualifying match against Bulgaria on Monday (local time).

The game was temporarily stopped twice in the first half by match referee following abuse from the stands, Goal.com reported.

The match official was even seen discussing the matter with England skipper Hary Kane and an announcement was also made at the stadium.

"Because of racist behaviour which is interfering with the game, the referee has indicated he may have to suspend the match. Please be in no doubt that the game may be suspended and abandoned if racist behaviour continues," was announced.

Three Lions' debutant Tyrone Mings had made the fourth official aware of abuse as he went on to say: "You hear that?"

England were 2-0 up at the time, following goals from Marcus Rashford and Ross Barkley.

A large group of fans who were wearing black hoodies were pictured showing their middle fingers and performing Nazi salutes towards the pitch.

England coach Gareth Southgate made another complaint to the match officials shortly before half-time, with abuse towards his players continuing after the initial warning.

With the match stopped for a second time before the interval, large numbers of the above-mentioned section of spectators were seen leaving the stadium.

When the match resumed again, England was seen relentless and they defeated the hosts 6-0 after goals from Rashford, Barkley, Raheem Sterling and Kane.

Last week, Kane decided to take the fight against racism in his own hands. Striker Tammy Abraham revealed that the skipper has conveyed his charge against racism to all his teammates.

"Harry Kane said that if it happens (racist abuse) and we are not happy with it, we speak to the player and if he is not happy, we all come off the pitch together. It is a team thing. Do not isolate one person, we are a whole team. If it happens to one of us, it happens to all of us," Abraham had said.

Many England players including Raheem Sterling and Danny Rose, were subjected to monkey chants during the team's match in March this year.

UEFA has a three-step protocol to deal with racism. In the first step, an announcement is made at the stadium to instruct the crowd if there is any racist abuse.

In the second step, the players can leave the pitch while a second message is delivered to fans, before, finally, a decision is made whether to abandon or restart the match.

In England's domestic football competition, Marcus Rashford and Paul Pogba were also subjected to racial abuse on social media after failing to convert a penalty.