Fati, who became the third-youngest La Liga scorer, scored again in the second minute against Valencia. 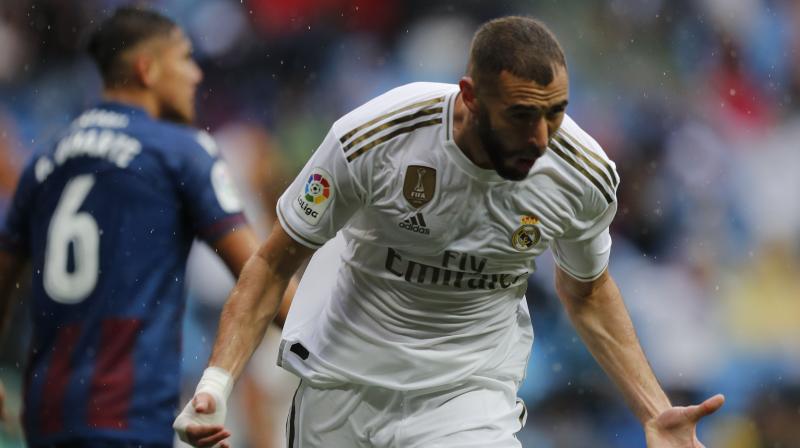 Benzema's goals came just six minutes apart in the first half at a wet Santiago Bernabeu, before Casemiro put Real 3-0 up. (Photo: AP)

Madrid: Karim Benzema scored twice for Real Madrid in a 3-2 win against Levante with Eden Hazard making his La Liga debut while later Barcelona breezed to a 5-2 win against Valencia with more magic from 16-year-old Ansu Fati.

Benzema's goals came just six minutes apart in the first half at a wet Santiago Bernabeu, before Casemiro put Real 3-0 up.

However, Levante, who had won their previous two outings, made a fight of it in the second half as they pulled goals back through Borja Mayoral and Gonzalo Melero.

"The second half was more difficult for us, but the overall feeling was positive," said coach Zinedine Zidane, whose team had drawn their previous two games.

"We have got the three points and we were incredible in the first half, the way we played, the goals, the commitment. We just need to stay focused for the full 90 minutes."

Hazard also came off the bench for the final half-hour to make his first La Liga appearance after a thigh injury had interrupted the start of his Real career following his 100 million-euro ($110 million) move from Chelsea.

The Belgian could now start when Real go to Paris Saint-Germain for their opening Champions League game on Wednesday.

"I am happy for him," said Zidane. "He will do us good. He is not ready yet though -- he has only trained four times with the team. But when everyone is fit, when we have our rhythm, we will hurt teams."

Gareth Bale will also be available to face PSG after suspension kept him out here, but Sergio Ramos will be unable to play because of a European ban. Zidane was also without the injured Luka Modric here. However, as well as Hazard, fellow summer signing Eder Militao came off the bench in the second half and the former Porto defender could start in Paris.

Real would have won by a greater margin here had it not been for some inspired goalkeeping from Aitor Fernandez, who produced a stunning one-handed stop to keep out a Benzema shot midway through the first half.

Atletico Madrid retained their place at the top of the table, but only by one point from Real Madrid after their first defeat of the season when they lost 2-0 at Real Sociedad at the Basque club's newly refurbished stadium.

With Lionel Messi still out and watching from the stands it was left to Fati, the teenager from Guinea-Bissau, to take the plaudits.

Fati, who became the third-youngest La Liga scorer when he came off the bench to net in a 2-2 draw at Osasuna this month, scored again in the second minute, before providing the assist for Frenkie de Jong's 7th-minute goal.

The teenager earned his standing ovation from the Camp Nou crowd when he came off after an hour.

"It's not usual that on his first touch he scores, and on his second he sets up a goal," said Barca coach Ernesto Valverde.

"To get used to being a Barca player is work for anyone, even more so for a boy so young, but he's a balanced kid, he strikes me as being at ease."

Kevin Gameiro got Valencia off the mark but a brace from the fit-again Luis Suarez after a contribution from Gerard Pique meant Max Gomez's injury-time second for the visitors was purely academic.