Arsenal fell behind to a stunning long-range strike from Jhon Cordoba before THREE second-half goals rescued the win. 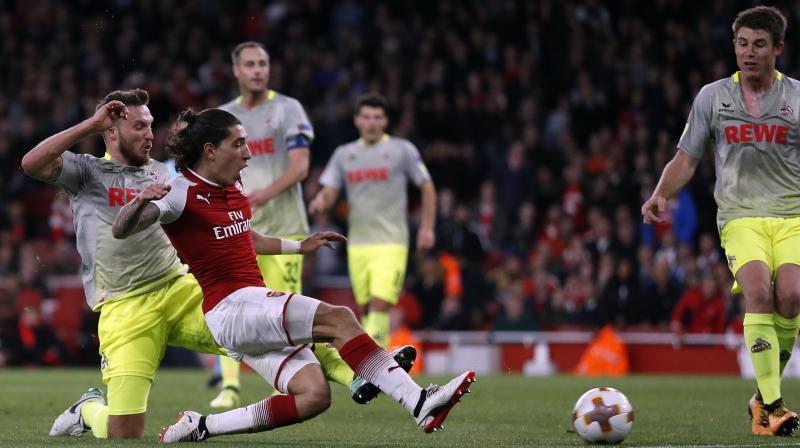 Arsenal recovered from a goal down to beat FC Cologne 3-1 after crowd disturbances in London. (Photo: AP)

London: Arsenal recovered from a goal down to beat FC Cologne 3-1 after crowd disturbances in London, while AC Milan’s new signing Andre Silva scored a hat-trick in a rousing 5-1 win at Austria Vienna as the Europa League group stage got underway on Thursday.

Fellow Serie A sides Atalanta and Lazio also won while Portugal’s Vitoria Guimaraes began their match against Salzburg with not a single European player in the team.

Arsenal’s Group H match was delayed by an hour as about 20,000 Cologne supporters fans, many without tickets, descended on The Emirates before kick off as their team returned to European competition for the first time in 25 years.

There were also scuffles between fans and when the action finally started, Arsenal fell behind to a stunning long-range strike from Jhon Cordoba before second-half goals from Sead Kolasinac, Alexis Sanchez and Hector Bellerin rescued the win.

Milan’s Portugal forward, signed from Porto in the close season, enjoyed a prolific night as he became the first player to score a European hat-trick for the seven-times European champions since Brazilian Kaka against Anderlecht in 2006.

Hakan Calhanoglu set Milan on their way with a fierce drive in the seventh minute and then set up Silva’s first two goals in the 10th and 20th of the Group D game.

Although Alexandar Borkovic pulled one back two minutes after the break, Silva completed his treble in the 56th minute after being sent clear by Franck Kessie’s through ball. Suso added the fifth just after the hour before Milan eased up.

Andrea Masiello tapped the ball in from a corner after 27 minutes before Alejandro Gomez rifled home a shot from the edge of the area in the 41st and Bryan Cristante added the third three minutes later after Everton were caught in possession.

“I have been waiting for this moment for a lifetime,” said Argentine Gomez. “I‘m not a young kid anymore so to play my first Europa League match at 29 and beat Everton is very emotional.”