French force up against fortified Croatians in football’s biggest match. 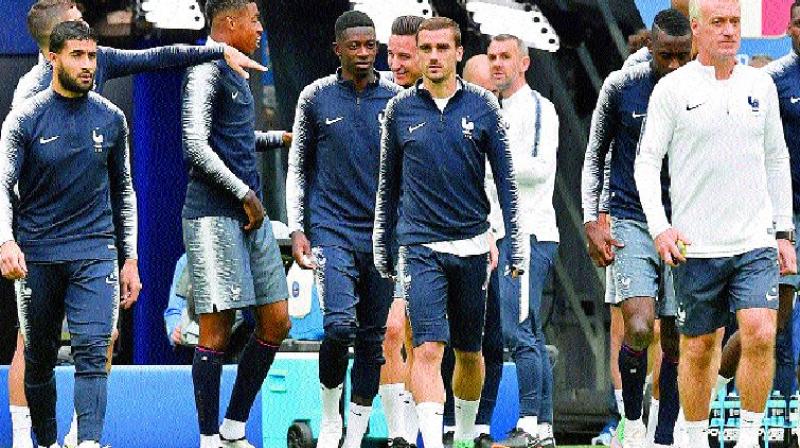 French players (above) and members of the Croatian team (below) warm-up at training sessions ahead of their World Cup final to be played at the Luzhniki Stadium in Moscow on Sunday.

Moscow: Frenchman Lucien Laurent scored the first goal of the World Cup in 1930 and the whole of France would like to see the event’s latest goal from his compatriot in a winning cause against Croatia here on Sunday. The small matter of a golden cup that weighs 6.175 kg is at stake.

Whoever foresaw a Croatia-France final at the Luzhniki Stadium on July 15 must get a special prize from Fifa because the two finalists are an unlikely pair. After reaching the semi-finals in their maiden World Cup in 1998, Croatia fell at the first hurdle in the three editions they subsequently played. But the little Balkan nation is now a win away from football heaven.

Italy may not have qualified for Russia 2018 but Italian World Cup winner Paolo Rossi’s following quote captures the significance of winning the final poignantly. “The most beautiful thing about winning the World Cup is the knowledge that you did something not only for yourself, but also for so many other people.”

Maybe Rossi said it for the Croatian players who are an emotional bunch. The French may appear to be a little insouciant but they need the trophy badly, too. Les Bleus, sure, have the talent to emulate the class of 1998, which was led by their current coach Didier Deschamps, but the World Cup final is as much a test of nerve and character as it is of skill.

The depth of the French squad can be gauged from the fact that three of their four defenders have scored a crucial goal each in every match from the round of 16. The onus is on left-back Lucas Hernandez to complete the quota on Sunday.

Deschamps wouldn’t mind if the winning goal came off a Croatian boot or head as long as the trophy returned to the country that played a major part in founding Fifa, the World Cup, Euro and the Champions League. For him, beauty is for pageants, as he seeks the cup that would validate his hard work and planning. His caution stems from the morale-sapping loss France suffered against Portugal in the final of Euro 2016 at home.

The French have been tidy at the back without leaking a goal in the last two rounds. Goalkeeper Hugo Lloris has been exemplary, as have been the central defenders, Raphael Varane and Samuel Umtiti.

Full-backs Hernandez and Benjamin Pavard, both 22 years old, have been a revelation in the ongoing tournament.

With Olivier Giroud and Antoine Griezmann being below par up front, Kylian Mbappe shoulders the attacking responsibilities on his teen-aged shoulders. The modern-day Hercules can do the job. If there is one player who can electrify Luzhniki with a moment of brilliance, it is the young man with the most beautiful surname at the 2018 World Cup.

The support of neutral fans in the title decider was set in stone the moment Croatia edged out England in the second semifinal. In a way, the final of the 21st World Cup is very much France vs Rest of the World. It is difficult to hate Croatia, the lowest ranked (20) team ever to reach the final.

Croatia are nothing if not for their resilience. They have not only survived three matches that went to extra time in the knockout rounds here, they also bounced back from a goal down each time.

Questions are being asked about the older squad’s fitness ahead of the big match;  even a dead Croatian would start running if he gets a chance to script history at the altar of international football.

Like late Shashi Kapoor famously said in the movie Deewar: mere paas maa hai, Croatia would like to say “We have got Modric.”