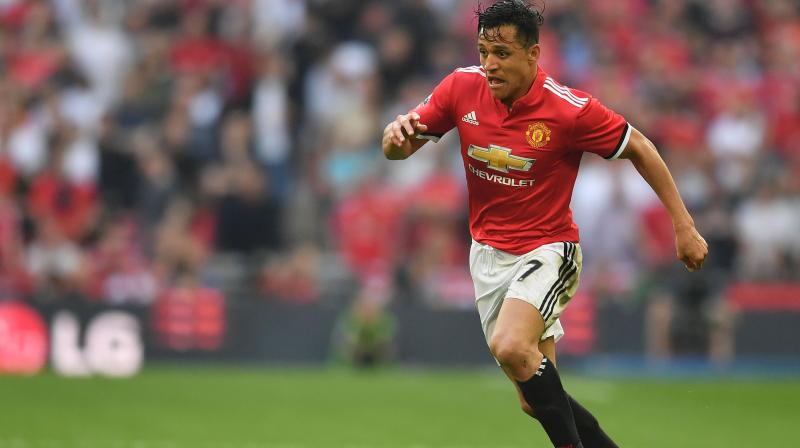 The return of the club's highest earner from a six-week injury layoff to make the voyage to Catalonia in such circumstances should be a source of inspiration. (Photo: AFP)

London: Manchester United travel to Barcelona on Tuesday needing another miraculous Champions League fightback from a 1-0 first-leg defeat on home soil to make the semi-finals.

The return of the club's highest earner from a six-week injury layoff to make the voyage to Catalonia in such circumstances should be a source of inspiration.

However, it is symptomatic of Alexis Sanchez's decline in 16 months at United that the Chilean makes his comeback behind Marcus Rashford, Romelu Lukaku, Anthony Martial and Jesse Lingard in Ole Gunnar Solskjaer's pecking order.

Sanchez signed reportedly the most lucrative contract in Premier League history when joining from Arsenal last January, earning close to 400,000 pounds ( 520,000 USD) a week plus a series of bonuses.

Unfortunately for the Red Devils, there has not been much cause for bonus payments as Sanchez has scored just five goals in 41 appearances for the club and only twice so far in his first full season at Old Trafford.

Sanchez left Barcelona for the Premier League in 2014 in search of a more prominent role after being squeezed out by the arrival of Neymar at the Camp Nou and with Luis Suarez soon to complete a fearsome front three alongside Lionel Messi.

By contrast, a hard-running style and years of grind for club and country seem to have burned Sanchez out having just turned 30 in December.

In four consecutive summers between 2014 and 2017, he helped Chile reach the last 16 of the World Cup, win two Copa America titles in two years and then make the final of the Confederations Cup.

So durable for much of his career, Sanchez's time at United has been permeated not only by poor performances but a series of injuries.

Falling down the pecking order in a Barca squad laced with star talent and built around arguably the best player ever in Messi is one thing.

Now Sanchez is a mere spectator even to a United side that has scored just once in five Champions League home games this season and failed to manage a single shot on target in the first leg against Barca.

The splash on Sanchez's contract also threatens to cost the club dearly, either in lucrative new deals, or losing some of their best players.

Solskjaer credited a fortunate 2-1 win over West Ham on Saturday to a stunning save from David de Gea.

"We have one of the best goalkeepers in the world," said the Norwegian, but De Gea's future is far from certain as he holds out for a pay packet at least on par with Sanchez with his current contract set to expire in 2020.

Paul Pogba is also in talks over a new contract and reportedly wants to be the club's highest earner if United are to ward off interest from Real Madrid.

A run of four defeats and two highly unconvincing 2-1 home wins over Watford and West Ham since United stunned Paris Saint-Germain with a 3-1 win in the French capital to make the last eight has laid bare how much surgery is needed on Solskjaer's squad, even if they hold onto De Gea and Pogba.

Instead, it is Sanchez they would love to ship out if a buyer can be found to fund his wages.

A Champions League quarter-final at the Camp Nou is exactly the sort of stage United's number seven was signed for.

But with a 75,000 pounds appearance fee included in his contract, it seems Solskjaer and United have decided there is little point throwing good money after bad.