Barcelona's 11-point lead atop La Liga became nine on Saturday after their much-changed team were held to a goalless draw by Huesca. 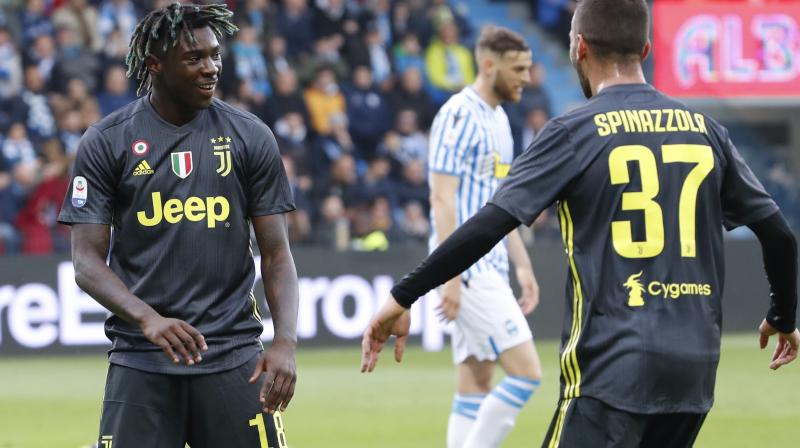 The incident is another reminder of the need for action across Europe, following recent racist abuse aimed at Juventus players, including young star Moise Kean, in a Serie A game at Cagliari earlier this month. (Photo: AP)

Paris: Juventus and Paris Saint-Germain both squandered chances to retain their domestic titles on a weekend which saw a much-changed Barcelona take their eye off the ball in La Liga.

In France, the weekend was overshadowed by racist abuse suffered by Amiens player Prince-Desir Gouano. AFP Sport looks at some of the main talking points from across the continent:

Racism rearing ugly head again:
The Ligue 1 relegation battle between Dijon and visitors Amiens was halted late in the second half after racist abuse targeted the away side's captain, Prince-Desir Gouano.

Gouano and other players remonstrated with fans after monkey chants were directed towards the Amiens defender, and a suspect was later arrested.

The incident is another reminder of the need for action across Europe, following recent racist abuse aimed at Juventus players, including young star Moise Kean, in a Serie A game at Cagliari earlier this month.

England players were also subjected to monkey chants during a Euro 2020 qualifier in Montenegro, and FIFA president Gianni Infantino has appealed for a "zero tolerance" approach to racism in the game. The French league has confirmed it will investigate the Gouano incident.

Tensions grow at PSG:
Paris Saint-Germain's stunning 5-1 defeat at Lille will only delay their inevitable French title triumph, but it was the manner of it that was especially worrying.

PSG lost two players to injury in the first 24 minutes and had Juan Bernat sent off before half-time. The accumulation of injuries and suspensions does not help coach Thomas Tuchel, who was unable to name a full quota of substitutes in the continuing absence of Neymar, Edinson Cavani, Angel di Maria and Marquinhos.

Afterwards, the German appeared to point the finger at the club's hierarchy for the pitiful state of his squad. "We are not even able to put out 16 players. It's not possible to have to work like that," said Tuchel, who has seen Adrien Rabiot and Lassana Diarra frozen out this season.

"We are missing lots of players but everyone accepts it because we keep on winning. But now it's too much."

Barcelona can afford slip-up:
Barcelona's 11-point lead atop La Liga became nine on Saturday after their much-changed team were held to a goalless draw by Huesca.

Lionel Messi was left out completely while Gerard Pique watched on television with a bowl of seafood as coach Ernesto Valverde kept one eye on Tuesday's Champions League quarter-final second leg against Manchester United.

Brilliant Buerki saves Borussia:
Borussia Dortmund kept the heat on Bayern Munich in Germany, but their narrow 2-1 win over Mainz was no cause for celebration as far as goalkeeper Roman Buerki was concerned.

Buerki spared Dortmund's blushes with a string of late saves after his team came close to capitulation. Jadon Sancho's brace had given a dominant Dortmund a 2-0 lead at the break.

"I don't know what my team-mates were thinking. At times it felt like Mainz had two extra players," said Buerki. "If we want to win the league, we have to play at our limit and beyond," captain Marco Reus told Sky. Dortmund remain a point behind Bayern with five games left.

Kessie, Bakayoko get shirty:
Tiemoue Bakayoko and Franck Kessie could face punishment in Italy for holding up Lazio defender Francesco Acerbi's shirt like a trophy after Milan's 1-0 win when the rival Champions League contenders met on Saturday.

Acerbi had angered the pair when he said there was "no comparison" between the teams before the game, with Bakayoko replying on Twitter: "OK Acerbi see you Saturday".

Acerbi said he had swapped his shirt "to put an end to the issue" but was furious when they held it aloft on front of Milan's fans afterwards."Fomenting hatred is not sport but a sign of weakness," said Acerbi on social media. Both apologised with the Ivorian Kessie, whose penalty sealed the win, insisting it was "just a joke, nothing more".