Candreva and Icardi scored in the first half but Romagnoli reduced the deficit in the 83rd minute before Zapata's leveller. 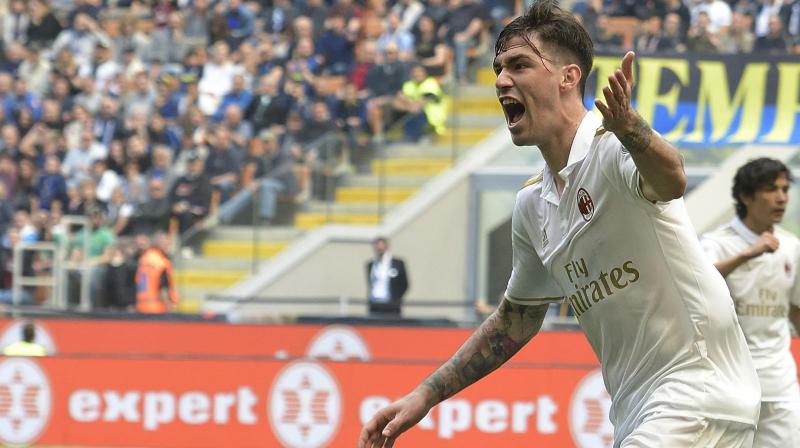 Milan remained sixth in Serie A, two points above Inter in the race for the final qualifying position for the Europa League. (Photo: AP)

Milan: Cristian Zapata's last-minute equaliser prevented the new era at AC Milan from getting off to a losing start on Saturday as the Rossoneri drew 2-2 at city rival Inter Milan.

Antonio Candreva and Mauro Icardi scored in the first half but Alessio Romagnoli reduced the deficit in the 83rd minute before Zapata's leveller in the seventh minute of stoppage time.

Milan remained sixth in Serie A, two points above Inter in the race for the final qualifying position for the Europa League.

This was the first match since the $800 million takeover of Milan was completed on Thursday by Chinese-led Rossoneri Sport Luxembourg, ending Silvio Berlusconi's 31-year reign.

Inter, who are also owned by a Chinese group, were taken over last year by Suning.

New Milan President Yonghong Li was in the stands for the match, which kicked off at 12:30 p.m. local time – perfect for prime time Chinese television audiences seven hours ahead.

Milan fans unveiled a banner at halftime, mocking that decision as it depicted a man eating cash with chopsticks and the words, "All you can eat ... have a nice meal Italian league."

The Rossoneri supporters also displayed another banner at the start of the first half, with the words: "We hope to see seriousness, commitment and presence. We give our welcome to the new management."

Milan attacked from the start and almost took the lead in the second minute but Carlos Bacca fired over from close range after Samir Handanovic denied Gerard Deulofeu and a series of shots were charged down.

Deulofeu went close again in the 14th but his effort went off the base of the right post from a tight angle.

Milan looked to be the more dangerous side but Inter broke the deadlock in the 36th on their first real chance. Roberto Gagliardini sent a long ball over the top to Candreva, who shrugged off Mattia De Sciglio to chip it over the onrushing Gianluigi Donnarumma.

Inter doubled their lead a minute from halftime as Ivan Perisic won the ball in midfield, played a one-two with Icardi and then raced down the left flank before pulling back from the byline for the Argentine to tap in at the near post.

It was Icardi's first goal against Milan in nine matches.

Milan almost got back in the match in the 66th minute but Handanovic pulled off a stunning save to deny Deulofeu.

It did reduce the deficit when Romagnoli volleyed in Suso's cross from close range, giving Milan new belief.

Everyone, including Donnarumma, went up for a corner, which Bacca headed on and Zapata managed to turn into the net off the underside of the bar. Goal-line technology proved the ball had gone over.