Fernandes directed the ball towards Dawda Ceesay whose shot was blocked by defender Kallon Kiatamba. 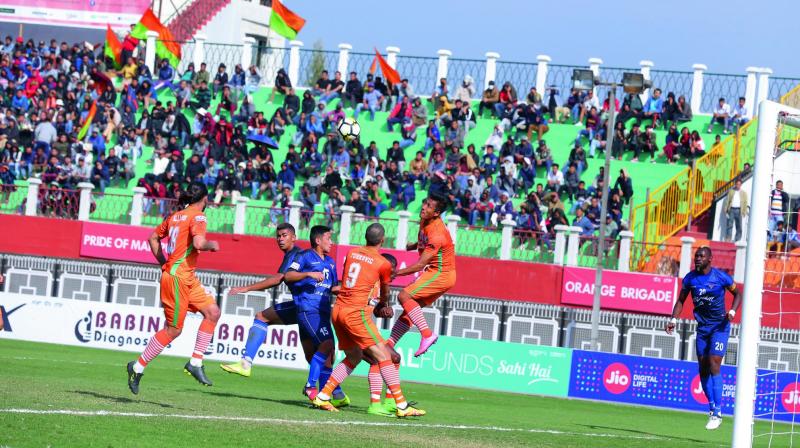 Action from the Neroca FC-Churchill Brothers match in the I-League.

New Delhi: Aryn Williams’ 86th-minute strike helped Neroca FC move to the top of the I-League standings with a 1-0 win over Churchill Brothers in Imphal on Wednesday.

Neroca now have 31 points after 16 matches, above Minerva Punjab FC (29 points from 14 games).

East Bengal, who defeated Minerva 1-0 on Tuesday, are third with to 26 points from 14 games. Churchill are seventh with 16 points after 14 outings.

Neroca could have taken the lead as early as the second minute when Williams got his head to a teasing cross into the box from the right flank. But an alert Churchill goalkeeper James Kithan denied the midfielder. Churchill midfielder Israil Gurung then caused havoc inside the Neroca box when he found Nicholas Fernandes with a cross in the 26th minute.

Fernandes directed the ball towards Dawda Ceesay whose shot was blocked by defender Kallon Kiatamba.

Both sides continued to create and squander chances as the match remained goalless a half time.

Neroca replaced striker Nedo Turkovic with Sushil Singh midway through the second half.

Williams finally found some luck in front of goal at the fag end of the match. Saran Singh’s long ball was chested down by the midfielder before shooting past Kithan.