Arsenal moved into third above Liverpool on goal difference, just one point behind Tottenham. 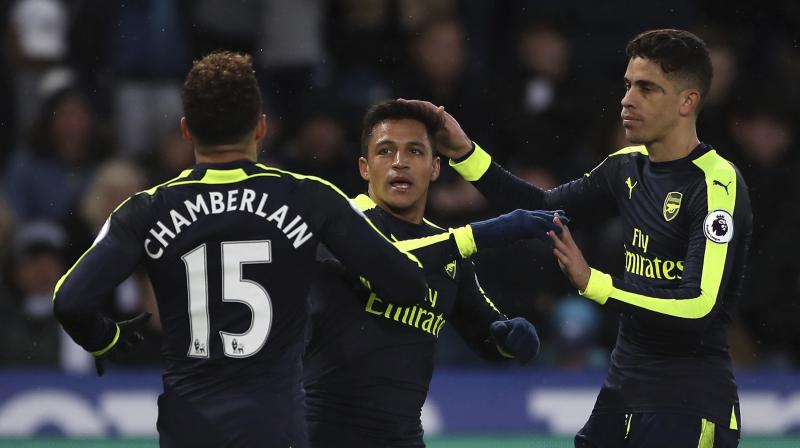 Between Giroud's opener and Alexis Sanchez's 73rd minute effort, Paul Clement, in his first league game in charge of the Swans, also had to watch miserably as Jack Cork and Kyle Naughton put past their own keeper from Alex Iwobi shots. (Photo: AP)

London: Tottenham Hotspur's Harry Kane enjoyed a special day with a brilliant hat-trick as his side and neighbours Arsenal maintained their pursuit of London rivals Chelsea at the top of the Premier League with four-goal wins on Saturday.

Kane celebrated his return to action after becoming a father last Sunday with a treble in the 4-0 demolition of West Bromwich Albion that saw Spurs jump into second place on 45 points, four behind Chelsea who visit Leicester City in the late game.

Arsenal moved into third above Liverpool on goal difference, just one point behind Tottenham, as Olivier Giroud struck his fifth goal in as many games to set them on the way to a 4-0 trouncing of Swansea City, who are now bottom of the table.

Between Giroud's opener and Alexis Sanchez's 73rd minute effort, Paul Clement, in his first league game in charge of the Swans, also had to watch miserably as Jack Cork and Kyle Naughton put past their own keeper from Alex Iwobi shots.

Hull City recovered to beat Bournemouth 3-1 with a double from Abel Hernandez giving new manager Marco Silva the ideal league debut as they leapt from last place above Swansea and Sunderland, who were beaten 3-1 at home by Stoke City.

Peter Crouch scored his 99th Premier League goal for the Potters while Marko Arnautovic netted twice, but the goal of the day came from West Ham's Andy Carroll who blasted home a mid-air volley in their 3-0 win over struggling Crystal Palace.

It was an emotional afternoon at Vicarage Road as Watford fans paid a lovely tribute to Graham Taylor, the former England manager who died on Thursday, before facing Middlesbrough.

At the club he took from the old fourth division into the top flight, the chant of "One Graham Taylor" rang around the ground, fans in the stand named after him held up cards that spelt out "Love G.T" and others were reduced to tears.

However, after a long round of applause for their old manager, the Hornets could not deliver the result the supporters craved as they missed chances and were held to a 0-0 draw.