Atletico de Kolkata are the only team to have defeated Delhi Dynamos. 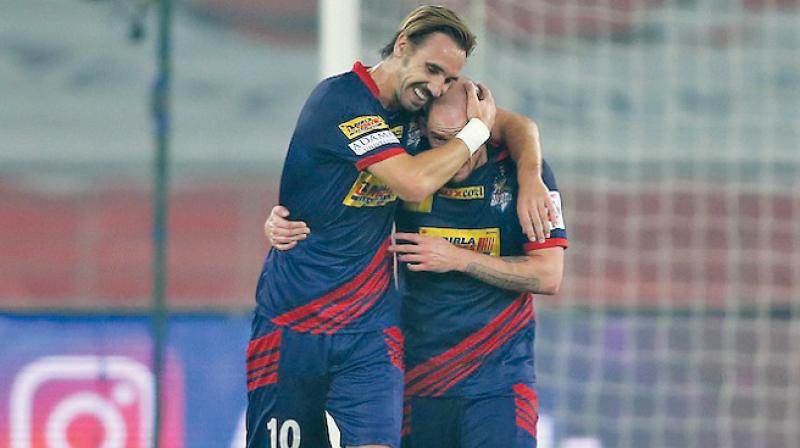 New Delhi: Despite being reduced to 10 men, Delhi Dynamos maintained their unbeaten record at home after a fighting 2-2 draw against Atletico de Kolkata in the Hero Indian Super League Season 3 here on Sunday.

Atletico de Kolkata are the only team to have defeated Delhi Dynamos this season and were on course for another upset when Iain Hume put them ahead in the 17th minute.

The former champions had an added advantage when Delhi Dynamos striker Badara Badji was sent off for two yellow cards in the 44th minute but there was plenty of drama in the second session as Milan Singh (63rd) brought in the equaliser for Delhi. Javi Lara (71st minute) gave Kolkata the lead again, only for Florent Malouda (74th) to make it 2-2.

Malouda’s equaliser for Delhi Dynamos helped him redeem himself after the former Chelsea midfielder had missed a second-half penalty.

The draw left Delhi Dynamos at the top with 17 points from 10 matches while Kolkata picked up their fourth point in the last four matches to occupy the fourth spot with 13 points.

The contest did not appear to be heading this way when Hume provided Kolkata the lead in the 17th minute. It was South Africa midfielder Sameehg Doutie, who played a delightful through ball for Hume, who after seeing goalkeeper Toni Doblas come out, placed the ball perfectly into the nets.

ATK had the upper hand after Delhi striker Badji picked up his second booking of the match for a needless handball and was sent off in the first half itself.

In the second session, the match saw frenetic action when Marcelinho was brought down by Prabir Das and won a penalty. Malouda stepped up to take the penalty but his effort was blocked by goalkeeper Debjit Majumder.

The visitors had a player advantage and made it count in the 71st minute to take the lead for the second time. It was Lalrindika Ralte from the left who pushed the ball for Helder Postiga. The ball, however, fell for an unmarked Lara and he smashed it into the nets.

Delhi were down at this stage but not out of the game. Malouda redeemed himself for his missed penalty with the equaliser in the 74th minute. The former French midfielder controlled he ball with his back to the wall, got the ball past two defenders and calmly slotted it past the goalkeeper.