Despite the scoreline, Guinea played with conviction, created more chances and had more possession than Germany. 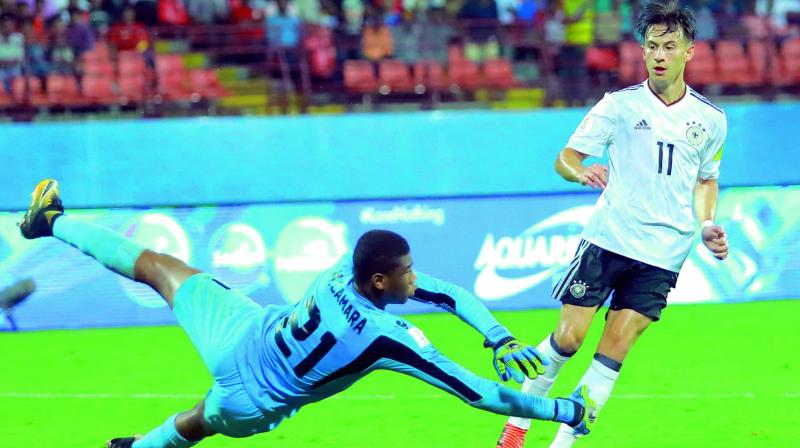 Kochi: Germany entered the knockout stage of the Fifa Under-17 World Cup, defeating an energetic Guinea, 3-1, in Group C at Jawaharlal Nehru Stadium here on Friday.

Jann-Fiete Arp and forward Nicolas Kuehn scored the goals in each half while substitute Sahverdi Cetin sealed the game by converting a penalty in the injury time. For Guinea, Ibrahima Souma was the goal-scorer.

Despite the scoreline, Guinea played with conviction, created more chances and had more possession than Germany. However, the Africans fluffed several chances and conceded easy goals to exit the tourney. In Margao, Iran defeated Costa Rica, 3-0 to enter the knockout stages as Group D leaders.

Dreadful defending by Ismael Traore paved way for Germany’s opener as he failed to clear a back pass and the ball found German captain Jann-Fiete Arp, who had only the goalie to beat.

Chances came for both teams and Guinea right-back Ibrahima Souma, who often troubled German defense with his mazy runs, almost scored in the 23rd minute but his shot off a beautiful move flew over the crossbar.

He made amendments three minutes later when he equalised after some poor defending by the Germans.

Against the run of the play, Arp, who won the ball on the left, found an unmarked Kuehn in the middle of the penalty box and the forward had only to shoot past the advancing keeper to regain the lead.

Cetin put it out of reach for Guinea in injury time as he scored from the spot-kick. Germany finished second in Group ‘C’ and will meet Colombia in Delhi on Monday.

Spain sail into knockouts
Real Madrid duo Mohamed Moukhliss and Cesar Gelabert scored in each half to send Spain into the knockout round with a comprehensive display against DPR Korea in the earlier game in Group D.

The match exposed the tactical gap between the two teams as the Koreans hardly had any chances on the target. They were outplayed by a disciplined Spanish side as the European champions dictated the proceedings with all flair and technique.

Spain were also unlucky as at least four of their shots hit the post. It was Gelabart who starred for La Rojita with his sublime assist and a goal. Neat one-touch play saw Ruiz find Gelabart whose pass was converted by Mohammed Moukhliss for the early lead.

Left-back Juan Miranda almost made it 2-0 but his header off a corner hit the near post and Ruiz’s attempt on goal was parried away by the Korean goalie. Gelabart had the next chance as he controlled a chip from midfield beautifully but his shot missed the target narrowly.

Ferran Torres’ beautifully curved shot from the right hit the far post while Miranda’s and Ruiz’s shots were also denied by the woodwork and it seemed Spain would end the match with only a goal. Coach Santi’s decision to substitute Torres with Jose Lara paid dividends as the latter’s effort to get past the goalie saw the ball deflected to Gelabart who had to only tap it into the open post.

Korean midfielder Pae Kwang Min was shown a straight red card with 26 minutes remaining and that summed up their campaign in the World Cup. They lost all three matches and were not able to score a goal.