Sports   Football  14 Oct 2017  Back these boys, they are the future: Matos
Sports, Football

Back these boys, they are the future: Matos

For now, the Under-17 boys will feature in the I-League with New Delhi set to be their base. 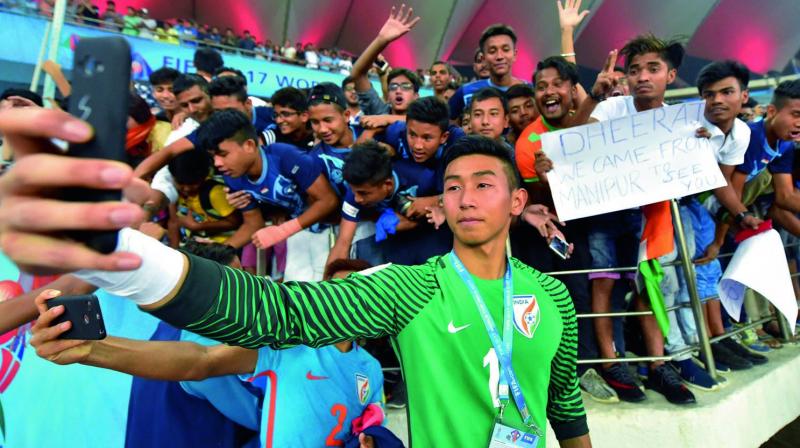 India goalkeeper Dheeraj Moirangthem takes a selfie with his fans after their last group match against Ghana in New Delhi on Thursday. (Photo: PTI )

New Delhi: India’s Under-17 football coach Luis Norton de Matos said his wards had moved from “generating hope” to “doing something significant” as they had gained experience in the ongoing World Cup at home.

India finished winless in Group A but generated interest with their fearless yet controlled style of play, as millions followed them on TV and thousands rooted for them at the Jawaharlal Stadium here.

Midfielder Suresh Singh said he was proud that this team “made people of India fall in love with football”, while de Matos too had rich words for his players.

The Portuguese, who has a couple of meetings lined up with the All India Football Federation in the coming week to assess his future, said “this bunch needs to progress”.

“I am proud and pleasantly surprised by the behaviour of my boys in the three matches they played. I am sure this generation is the one for future and the learning process has to go on,” de Matos said after India lost their final group engagement to Ghana 0-4.

India were thoroughly outplayed by Ghana on Thursday following impressive shows in the opening two matches against USA and Colombia. In all, they conceded nine goals and scored one.

The coach wasn’t pleased when reminded of this. “We have to remember that India are the only team who played in this tournament without qualifying. Don’t expect these boys to win. Today, when we took field against Ghana, we knew we would suffer.

“This country has to generate a culture of sport and the one that looks at the process. It is not about the money that you put in, but the organisation that matters. What you do with them is important.

“We were not playing Mauritius or Nepal. We were playing against Ghana, USA and Colombia in a World Cup and I would like to see how India’s senior teams perform against the senior teams of these nations.

“This experience at the World Cup is better than playing in the I-League or the Indian Super League. I know that when the ISL teams go to Europe, they lose to fourth division teams in Spain. And this is the reality.

“So, let these children play and learn.”

India have bid for the Under-20 World Cup in 2019 and de Matos, who took over in March this year, said he was keen to continue with the team.

For now, the Under-17 boys will feature in the I-League with New Delhi set to be their base.

“The players are intelligent but the progress is slow. Now they will play in the I-League and get strong. They need competition to play at this level.

“I congratulate them and everyone else in the country for this show. It was fantastic. Hope they can do something important in the future,” the coach said.