Golovin, Gazinskiy and Dzyuba were the other scorers as the host ran out comnfortable winners. 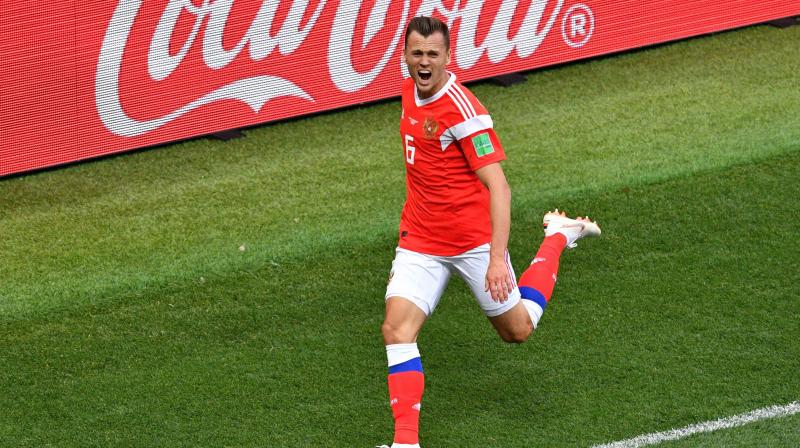 Moscow: Host Russia made a perfect start to their World Cup campaign beating Saudi Arabia 5-0 in their opening Group A match at Luzhniki stadium in Moscow on Thursday.

Substitute Denis Cheryshev scored two goals, while Golovin, Gazinskiy and Dzyuba also got their name on the score sheet as the host dominated the opposition.

Yuri Gazinsky opened the scoring after beating the keeper with a header from close range.  Substitute Cheryshev doubled the lead for the host with a calm finish from the close range.Another substitute Artem Dzyuba also found the net within seconds after coming from the bench when he headed home Aleksandr Golovin’s cross.

In stoppage time, Russia scored two more goals as Cheryshev got his second of the match with a beauty as he scored from outside of his left foot, while Golovin rounded off the game by scoring from a free-kick.

GOAL 90+4: Golovin also gets his name in the score sheet after being earlier involved in the two goals.

GOAL 90+1: Cheryshev scores a stunner. The winger puts the ball in the top corner giving no chance to the Saudi keeper.

Yellow Card: Aleksandr Golovin is shown the first yellow card of the tournament.

Stats: Dzyuba’s goal (89 seconds), is the quickest goal by a substitute at a World Cup tournament since Marcin Zewlakow scored for Poland vs USA in 2002.

GOAL 71st minute: Russia looks to have almost sealed the match. Dyzuba scores within seconds after coming onto the pitch as a substitute . Golovin floats the ball from the right flank as the midfielder rises above the Saudi defense to head the ball into bottom right corner.

63rd minute: Cheryshev tries to go for goal only to be denied by legs of Al-Burayk

It's the end of the first half and it's the host nation who are currently ahead in terms of goal. Yuri Gazinsky scored the opening goal of the tournament, while Denis Cheryshev doubled the lead just before half time.

Alan Dzagoev left the game after just 23 minutes as he suffered a hamstring injury, but super sub Cheryshev ensured that the home side stretched their lead going into the interval.

Saudi Arabia were left exposed at the back as defenders failed to deal with arial ball which led to the opening goal and then a quick counter attack by Russia gave the Saudi defense no chance.

Will Russia continue their dominance in second half or will Saudi make strong comeback.

GOAL! 43rd minute: Substitute Denis Cheryshev gets his name on the scoring sheet doubling his teams lead. The attack started from the right before the ball was switched to the left flank. two players tried to tackle the midfielder but he hits the ball into the back of the net with a neat left foot strike.

Stat: Cheryshev is the first Russian player to appear for the country at a World Cup while plying his trade in a foreign league.

36th minute: Penalty shout from Golovin who goes down inside the penalty box but the referee has declined the appeal. Osama Hawsawi makes inch perfect tackle.

23rd minute: Alan Dzagoev clutches his hamstring and it is a big blow for Russia in the opening game. He is replaced by Denis Cheryshev for rest of the match.

GOAL! 12th minute: Gazinsky  scores the opening goal of 2018 FIFA World Cup. they have scored from the corner as heads home the ball past  Saudi keeper Al-Mayoof.

The lowest-ranked teams at the tournament will face each other as Russia hosts Saudi Arabia at Luzhniki Stadium in Moscow, which is also venue for the July 15 final.

The No. 70-ranked Russians got an automatic spot as tournament host and the Saudis, at No. 67, have the lowest ranking of the 31 countries which secured places via qualifying.