Mumbai city finish on a high

Costa was disappointed not to play final at home but he was satisfied man with the performance of the players through out the season. 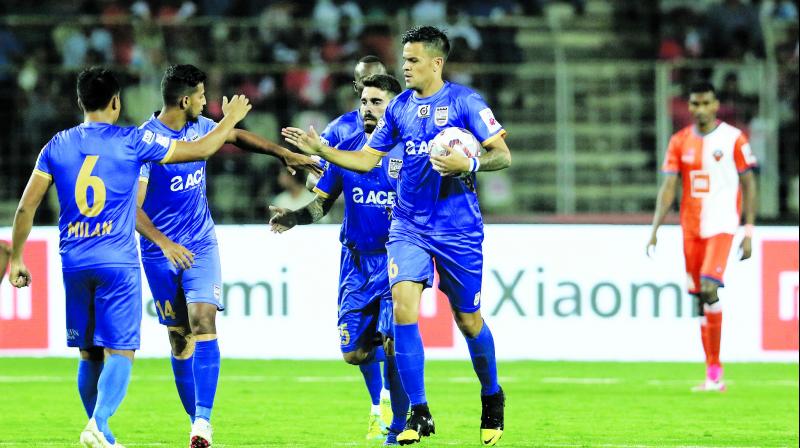 Mumbai City FC finally broke the jinx against FC Goa with 1-0 away win in the second-leg semi-final on Tuesday night. However, it wasn’t enough for them to play the final at home on Sunday as Goa advanced on the basis of 5-2 aggregate.

The damage was done in the first-leg semi-final at Mumbai Football Arena on Saturday when FC Goa thrashed the Islanders 5-1.

This was after Rafael Bastos had scored the first goal for Mumbai City against Goa after conceding seven goals in the two league encounters. However, Goa came back strongly to score five goals and defeat Mumbai City for the third time this season.

It was a tough ask for Mumbai City to reverse 5-1 loss in Goa in the second-leg semi-final and coach Jorge Costa who didn’t believe in miracles, had conceded defeat already. But the Islanders went up early again through Bastos to give hope but Goa defended well to stop any further damage. The campaign ended for the Islanders but on high with win over high flying Gaurs.

Costa was disappointed not to play final at home but he was satisfied man with the performance of the players through out the season.

Mumbai City had an ordinary start to season and 5-0 hammering in Goa made them vulnerable however they came back strongly back to be on nine-match unbeaten streak and inch close to semi-finals. However, they lost four games of the last six league games and also went down to Goa tamely in the first semi-final before strong finish on Tuesday night.

The Portuguese gaffer admitted they wanted more attacking option in the January transfer window but couldn’t go ahead due to limited budget. Senegalese striker Modou Sogou was the top scorer for Mumbai City with 12 goals while Bastos was relatively silent before scoring two goals in the two-leg semi-final against Goa.

“Our club doesn’t have the budgets like (some) other teams. It was difficult for me in the beginning to understand this reality. We made a process and we also had a very long unbeaten run and we played the semi-finals,” Costa told reporters in the post match press conference.

“In the winter transfer window when I saw other clubs making movements, I could not make them here. I felt we needed something extra to attack in the last few games but we could not do it. I am very happy but I am also sad because I wanted to play the final at home on Sunday,” he added.