But an absolute stunner by Lobo silenced the home crowd to give his side the lead with 30 minutes of game-time left. 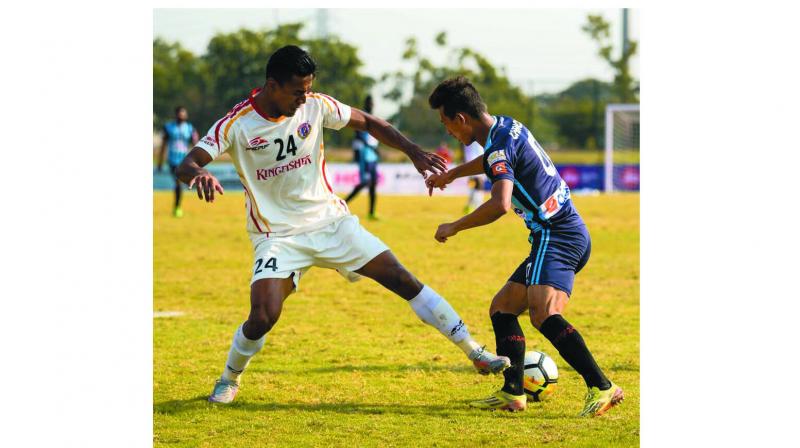 Action from the I-League match between Minerva Punjab FC and East Bengal in Panchkula on Tuesday. East Bengal won 1-0.

Panchkula: East Bengal handed leaders Minerva Punjab FC their first defeat at home this season to stay alive in the I-League title race with a crucial 1-0 win here on Tuesday.

Third-placed East Bengal’s win came from a thunderous long-range volley from Cavin Lobo on the hour mark at the Tau Devi Lal Stadium.

Minerva now have 29 points from 14 games, second-placed Neroca FC have 28 from 15 matches, while East Bengal have 26 points from 14.

East Bengal dominated the game, penetrating Minerva’s defence with sharp through balls from the flanks.

Minerva goalkeeper Rakshit had to come off his line numerous times to clear the ball from a one-on-one situation to keep the scoreline barren. Minerva slowly came back into the game in the latter part of the first half when Chencho and William started attacking from the wings. The red and golds almost conceded an own goal from a wayward clearance by Eduardo in the 37th minute, which landed on the roof of the net. At half time, it was goalless.

Minerva began the second half with pacey attacks from the wings. Gagandeep had an opportunity in the 48th minute but his mistimed shot was easily stopped by Ubaid.

Minerva then had another chance when William was tripped in a dangerous position just outside the penalty box but the resultant free kick by Sukhdev was off-target.

But an absolute stunner by Lobo silenced the home crowd to give his side the lead with 30 minutes of game-time left.

Chencho had an extremely good chance to level the score in the 79th minute but his shot went straight into the goalie’s gloves. The Kolkata giants will now travel to Kozhikode to challenge Gokulam Kerala FC on February 17, while Minerva host the Kerala-based side three days later.

Neroca FC will look to climb to the top of I-League standings with a win against a resurgent Churchill Brothers in Imphal on Wednesday.

Neroca won 1-0 in the first leg in Goa last month. Churchill have 16 points from 13 games so far and are placed seventh.