It was Kerala’s first win against Chennaiyin in the league phase over the three seasons. 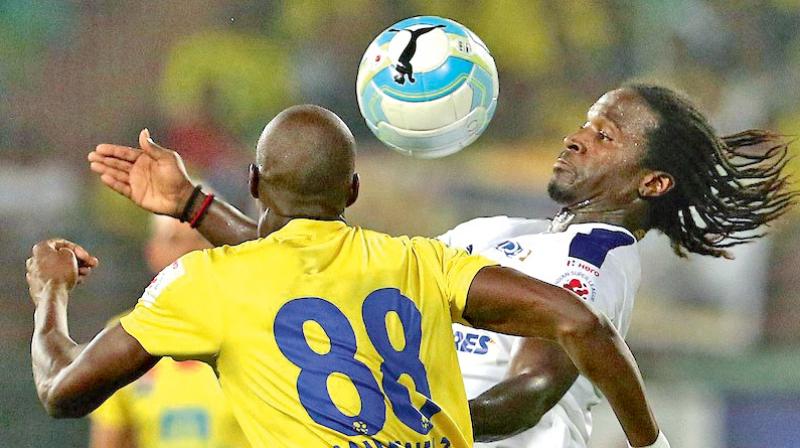 Chennayin FC’s Bernard Mendy (right) and Azrack Mahamat of Kerala Blasters vie for the ball in their ISL-3 match in Kochi on Saturday. Blasters won 3-1.

Kochi: “We are looking for one or two players to really explode toward the tail end of the season.” Kerala Blasters head coach Steve Coppell had said midweek, but even he wouldn’t have guessed the kind of explosion that was in store.

Local boy C.K. Vineeth struck a late brace, a sumptuous volley included, as the hosts bounced back from a goal down to thrash champions Chennaiyin FC 3-1 at the Jawaharlal Nehru Stadium here on Saturday.

Bengaluru FC loan player and Kerala’s matchwinner against Goa on Tuesday on his first start of the season, Vineeth scored in the 85th and 89th minutes after substitute Didier Kadio’s 67th minute goal had cancelled out Bernard Mendy’s opener on 22 minutes.

It was Kerala’s first win against Chennaiyin in the league phase over the three seasons and catapulted them into second place with 15 points while it leaves Marco Materazzi’s side stuck on a precarious seventh position.

Upbeat Dynamos take on ATK
Leaders Delhi Dynamos will look to exact revenge when they lock horns with Atletico de Kolkata at home on Sunday.

Dynamos lead the table with 16 points and can open a four-point gap if they manage full points against Kolkata, the only team who have defeated them this season.

“There is no revenge because it was a good match when we lost against a good team. There is special motivation for us to focus on this team because it’s a team against whom we lost.

For this reason, we will try to concentrate on this game,” DD coach Gianluca Zambrotta said.