The Indian Junior men's team defeated Malaysia 4-2 in their first match of the 9th Sultan of Johor Cup here on Saturday. 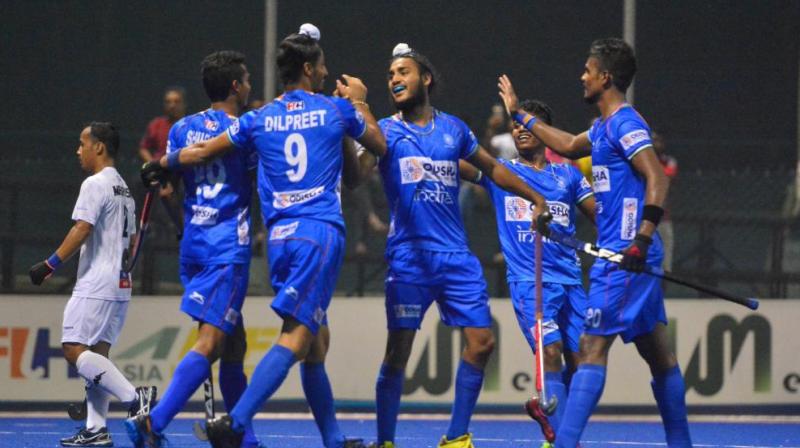 Johor Bahru: The Indian Junior men's team defeated Malaysia 4-2 in their first match of the 9th Sultan of Johor Cup here on Saturday.

Malaysia started the first quarter in an aggressive note. Muhammad Hassan and Muhammad Zainudin found the back of the net in the eighth and ninth minutes respectively. Hassan put Malaysia ahead with a field goal before Zainudin converted a penalty corner.

The Indian team tried to make a few inroads, but the Malaysian defense stood strong. Both the side kept getting into great positions, but the score remained 2-0. India and Malaysia remained toe-to-toe with each other for the rest of the quarter as the teams went into the first break.

India got off to a great start in the second quarter as they earned a penalty corner, however, the Malaysian defense blocked out the Indian attack.

A few minutes later, India pulled back through a fantastic penalty stroke by Pratap Lakra. The young side continued to be in more aggression and kept looking for openings.

The Indian team's persistence paid dividends when they earned a penalty corner just before the half-time whistle. However, the Malaysian defense unit stood firm once again. Malaysia led at 2-1 at the end of the first half.

India rode on the momentum and leveled the match at the start of the third quarter. Pratap Lakra converted a penalty corner in an exquisite manner. India continued to put pressure on the Malaysian defense and earned the lead for the first time in the match through a fantastic penalty corner conversion by Shilanand Lakra in the 39th minute. The Indian young legs continued to be in a dominant position as they led 3-2 at the end of the third quarter.

India continued the attack in the fourth quarter as well, but the Malaysian defense unit managed to block out everything thrown at them. The home side tried to fight back through some crucial moves, however, India ensured that they stayed in the lead as they created goal-scoring opportunities, but couldn't find the back of the net.

India had an excellent chance to score their fourth goal when they earned a penalty corner in the dying minutes of the match, but the attack was saved by the Malaysian defense. However, Uttam Singh scored a brilliant field goal in the last minute of the match to help India walk off the field as winners.

India will face New Zealand in their next round-robin league-stage match here on October 13.