Juan Penaloza who scored both goals against India in their 2-1 win, was Colombia’s star here too with a goal and an assist. 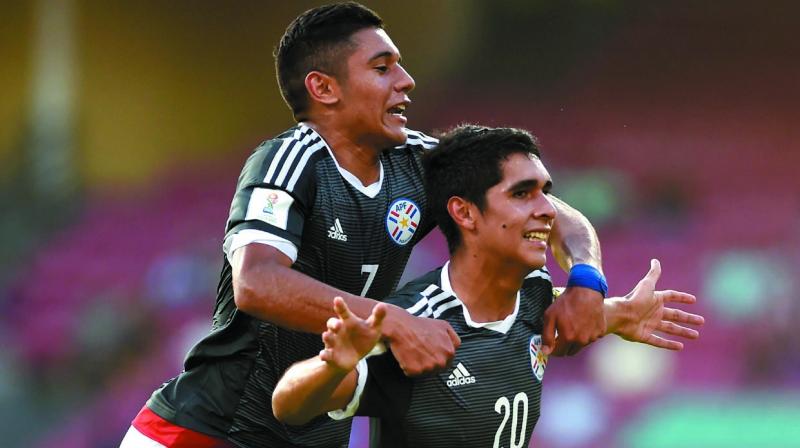 Paraguay’s Giovanni Bogado (right) celebrates after scoring in their Group B match against Turkey. (Photo: AFP)

Mumbai: Colombia tamed a hapless USA 3-1 at the DY Patil Stadium on Thursday to finish the league with six points like USA and Ghana, qualifying as the second team from Group A behind the Africans.

Third-placed USA are also assured of a berth but may have to wait until Saturday officially to learn their fate.

Juan Penaloza who scored both goals against India in their 2-1 win, was Colombia’s star here too with a goal and an assist. Deiber Caicedo got the third goal after Juan Vidal hit the opener for Colombia, cancelled out by George Acosta in the first half itself.

It was the South Americans who took the early lead through Vidal. A long throw saw US defenders failing to clear and Caicedo found Vidal who finished perfectly in the third minute.

Acosta shot just wide after a good one-two with skipper Sargent but didn’t miss a second time in the 24th minute after Andrew Carleton broke through from the right and sent back a low cross.

Penaloza sparked wild celebrations in the Colombia dugout with a rasping free-kick taken from the left of the box that flew into the far corner off the crossbar.

Despite 2-1 cushion, the South Americans were in no mood to sit back and Caicedo scored in the 87th minute on a low cross from the left by Penaloza to seal the match and knockout berth.

Turkey 3-1 in Group B. Antonio Galeano capped the thumping win for Gustavo Morinigo’s side while Kerem Kesgin scored a consolation goal in injury time. The South Americans topped the group with all nine points on offer. Turkey finished fourth with one point and became the first to be ousted from the tournament.