The Asians shown flashes of brilliancy against Brazil and Niger and have speedy forwards. 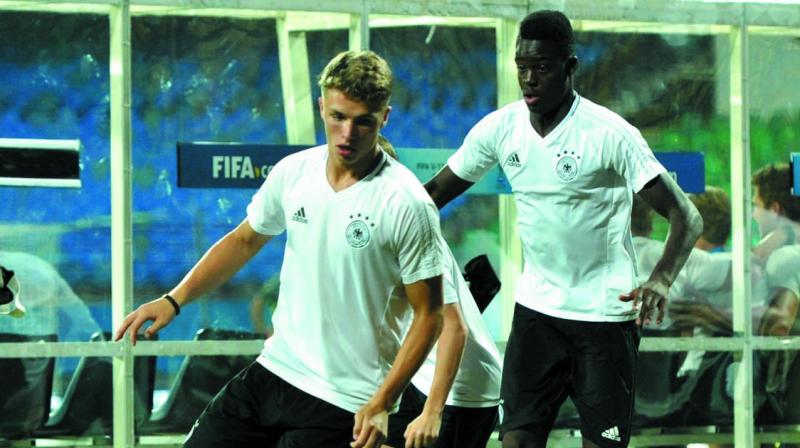 Kochi: Even before the kickoff of the Under-17 World Cup, Germany were one of the teams to have aroused plenty of interest. With the senior team a powerhouse in world football and their youth development programme considered one of the best, the anticipation was only natural.

However Iran stunned enthusiasts with the massive 4-0 thrashing of the highly-rated Europeans in Goa and the Germans will be looking to redeem pride in their Group C match against Guinea at the Jawaharlal Nehru Stadium in Kochi on Friday.

At the Iran game, shock turned to surprise as the Asians showed how porus the German defense was. It was not only the back line that performed poorly, as the much-hyped forward line up that includes a Bundesliga player, Jann-Fiete Arp, had only four shots on goal despite having 53 percent of possession.

Had goalkeeper Luca Plogmann not made several important saves, Iran may have been out of sight before half-time at Goa.

Coach Christian Wueck will be scratching his head for a solution and the scheduling of match at Kochi will have done little to help as their flight was late by two hours on Wednesday.

They had only a two-hour session at the stadium to sort out the mess.

For Guinea also this is a must-win match. Coach Souleymane Camara’s main concerns will be his profligate forward line that produced 42 attempts on goal in their drawn match against Costa Rica but scored only twice. They lost their first match to Iran and have only one point and their progress depends on the results of Iran-Costa Rica match.

Spain up for DPR Korea test
Spain’s players may need all their attacking skills when they face a defensive DPR Korea in Group D here on Friday.

DPR Korea frustrated Brazil by sitting deep and relying on counter-attacks in their previous match and Spain will expect a similar experience in a must-win match for the La Rojitas.

Spanish coach Santi relied on players from FC Barcelona and Real Madrid to register a dominating win over Niger and the linkup of these players will be the key for the Spanish to progress to the knockout stage.

Meanwhile DPR Korea have only pride at stake as they have lost both group matches and are out of the World Cup.

The Asians shown flashes of brilliancy against Brazil and Niger and have speedy forwards.