Goalkeeper Dheeraj Singh made a save but the ball fell to Aiyah, who was placed perfectly at the top of the box. 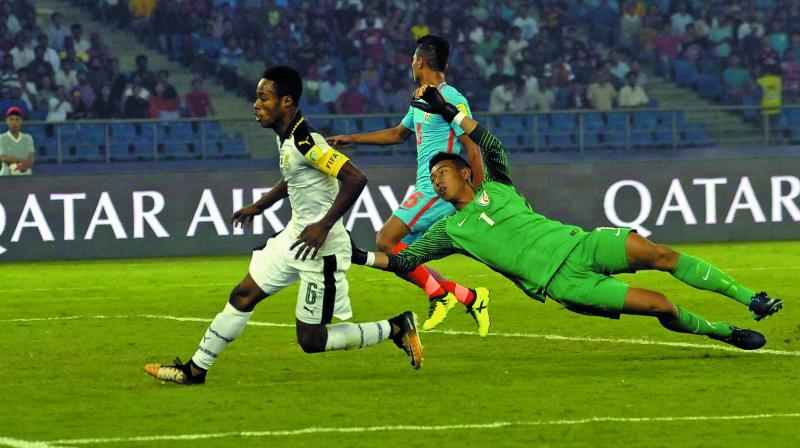 Ghana’s Eric Ayiah (left) in action in their Under-17 World Cup Group A match against India in New Delhi. (Photo: Pritam BandYopadhyay)

New Delhi: Winless India bowed out of the Fifa Under-17 World Cup with a 0-4 thrashing at the hands of Ghana in their final Group A match at the Jawaharlal Nehru Stadium here on Thursday night.

In all, India gave away nine goals and scored just one, but in their maiden Fifa event, the performance in the last week provided many positives.

On the day, they knew they needed a big win to stay in contention for the round of 16.

On the field though, the script played out on on expected lines.

Ghana took time to settle but once they did, it was clear that they meant business. Skipper Eric Ayiah was in top form, scoring two brilliant goals (43rd, 52nd minutes) that pushed India on the back foot, while Danso Richard (86th) and Toku Emmanuel (87th) pumped in late goals to make it a night to remember for the table-toppers.

India began on a fast note looking for an early goal but it was not an easy task to get past the sturdy and agile back line of Edmund Arko-Mensah and Najeeb Yakubu.

It was the 43rd minute that changed the complexion of the game after an even first half hour. Ghana’s Sadiq Ibrahim collected a ball from the centre and took a shot at goal from the right.

Goalkeeper Dheeraj Singh made a save but the ball fell to Aiyah, who was placed perfectly at the top of the box. The Ghana skipper, who had earlier missed a few chances, was spot on this time sending a powerful strike to silence the home crowd.

In the second half, it didn’t take Ghana long to slice open the defence yet again. And it was the man-in-form Aiyah once again as he picked up his second goal of the day making it 2-0 in the 52nd minute. The match also had its share of yellow cards and plenty of hard tackles as the teams played out a physical game.

India made several substitutions – Ninthoinganba Meetei, Rahim Ali and Lalengmawia coming in for Nongdamba Naorem, Amarjit Singh and Aniket Jadhav late in the game – but couldn’t get going when it came to goals.

In all, they only had six attempts at goal compared to Ghana’s 27 and that was more or less the story of the day. The home crowd kept decibels level high throughout trying to lift the team’s spirits, but India were left to play catch-up with Richard and Emmanuel carving through the tired Indian defence.

Mali seal last 16 berth
Earlier, Mali joined group toppers Paraguay in the round of 16 from Group B with a convincing 3-1 win over New Zealand here.

Mali needed just a draw to advance but went all out, making the Kiwis sweat on the day. Jiddou Salam (18th minute), Traore Djemoussa (50th) and Ndiaye Lassana (82nd) scored in a match dominated by the African champions, who finished with six points from three matches.

Mali were fluid in attack, working well through the flanks and that showed in their final statistics – the team having 36 attempts on goals to their opponents’ four, and 61 per cent ball possession.