Leicester's unbeaten start to the current season is in stark contrast to the stuttering opening endured by Ole Gunnar Solskjaer's side. 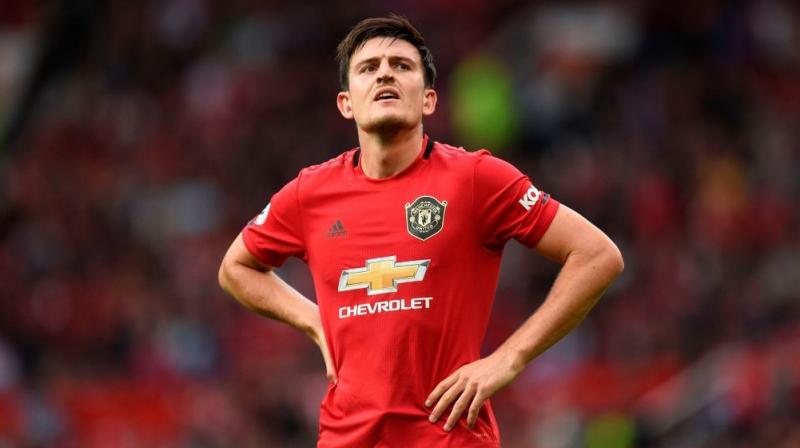 Harry Maguire faces his old club Leicester for the first time this weekend with the Manchester United defender looking up the Premier League table at his high-flying former employers. (Photo:AFP)

Manchester: Harry Maguire faces his old club Leicester for the first time this weekend with the Manchester United defender looking up the Premier League table at his high-flying former employers.

When Maguire made his world-record 80 million pounds (USD 97 million) move to Old Trafford this summer, it was widely seen as a step-up for the 26-year-old, the opportunity to prove himself on a larger stage.

But as Brendan Rodgers brings the Foxes to Old Trafford, he does so with Leicester five places and three points above United in the early-season league table.

Transport for Greater Manchester, who have become known in the city for their witty electronic message boards warning of forthcoming events, even joined in the debate billing the fixture as a "Race for 6th!" this week.

But, with Leicester currently sitting in third and supporters daring to dream of the unforgettable 2015-16 campaign when their club ended the season as champions, Maguire could be forgiven for looking slightly enviously at the team mates he left behind.

Leicester's unbeaten start to the current season has been in stark contrast to the stuttering opening endured by Ole Gunnar Solskjaer's side.

The opening-day demolition of Chelsea hinted at better times ahead for the Norwegian at the start of his first full campaign as United manager.

But underwhelming draws at Wolves and Southampton sandwiched a demoralising home defeat to Crystal Palace and the fact United have missed two penalties in those games, one by Paul Pogba and one by Marcus Rashford has added to the sense of looming crisis.

Maguire's form has followed United's, strong and impressive at first but increasingly less so, culminating in his midweek performance for England in which he was part of a defence that performed poorly in a 5-3 win over Kosovo.

Whatever his shortcomings in some areas, Maguire has, at least, made an impression on his new team-mates every bit as strong as the one he left at Leicester.

"Harry has definitely slotted straight in, in terms of the social side and in terms of his mentality and attitude, which has been first class.

"The most important thing, though, is his quality and he was able to show that against Chelsea. We could all see he is quite at home in front of the Old Trafford crowd and quite at home as a Manchester United player."

With Jamie Vardy, ably supported by in-form James Maddison, having been one of the stars of Leicester's early-season flourish, the battle between the current and former Leicester team mates promises to be one of the highlights of the game.

Maddison has a chance to make a good impression on one of his potential future suitors this weekend.

The playmaker is reportedly being monitored by United as they ponder making a move for the emerging young England midfielder.

The form of top four contenders United, Chelsea, Arsenal and Tottenham has been so erratic to date that Leicester will genuinely feel capable of securing a place in the Champions League next season.

At the very least, the prospect of Leicester finishing above United is all too real.

The Foxes, under Claudio Ranieri, of course finished above United, and every other English club, in 2016 when they won the title, but before that it was 1973-74 when Leicester previously enjoyed a higher finish than the Old Trafford outfit.

However, last season United finished just three places above Leicester, suggesting the gap between the two is closing - a fact Maguire may discover for himself when he re-acquaints himself with the Foxes.