Jhingan said the team headed to Qatar with nothing to lose and thinking that India can take something from the match. 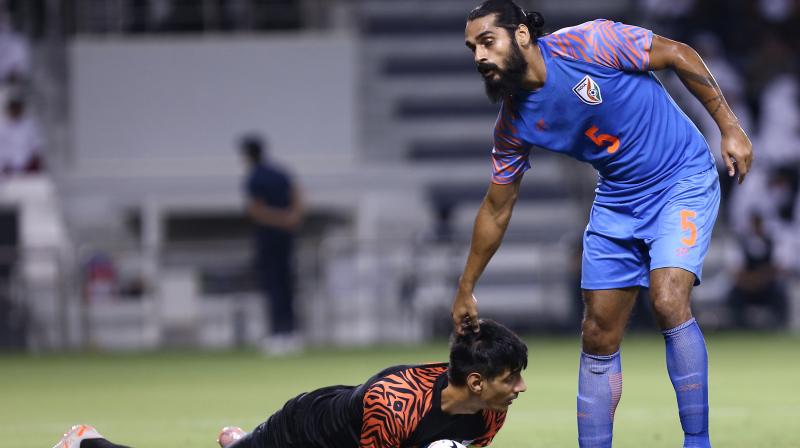 Jhingan said India will have to win against Bangladesh and Afghanistan before thinking of "surprising" Oman in the away match next year. (Photo: AFP)

New Delhi: Senior India footballer Sandesh Jhingan on Friday said that his team "defended with our lives" during the country's unexpected goal-less draw against Asian champions Qatar in their World Cup Round 2 qualifiers match in Doha.

India survived waves of opposition attack to deny Qatar any goal in a Group E match on September 10 in Doha which was completely dominated by the home side. It was one of the best results for India in recent times.

"We defended with our lives. We stuck to the basics, and Adil, Rahul, and Mandar and myself backed each other up. We were together, the communication was sublime, we were solid at the back," Jhingan wrote on the official AIFF website.

Indian goalkeeper Gurpreet Singh Sandhu was the star of the visiting side as he single-handedly stopped the Qataris from scoring any goal, and Jhingan described him as one of the best in the business in Asia.

"I have always had confidence in the players around me. And when I look around, my confidence grows. Gurpreet is one of the best in Asia at the moment, and players like Udanta, Chhangte, Sahal, Brandon, Thapa Ashique are all God's gift to Indian Football," the central defender said.

He said since his international debut in 2015, the goal-less draw against Qatar was a historic one.

"To come to Doha, and play against the Asian champions, and take away a point from their kitty is a really big thing, I am really happy and now we have to make sure we keep our feet on the ground," he said.

"After the Oman game (which India lost 1-2 at home) there was a slight feeling of disappointment in the team. Looking back, we still feel we should have taken points from that."

The 26-year-old defensive mainstay said the team headed to Qatar with nothing to lose and thinking that India can take something from the match.

"I always say 'it is about dreaming big, if you can dream big, you can achieve big goals'. I am extremely proud of this team, the characters and personalities associated with it. They are just so big.

"In the team meeting we stuck to the basics -- do the work, stay disciplined, stick to the system keeping the right mindset."

Talking about seniormost player and talisman Sunil Chhetri missing out the Qatar match due to fever, he said, "Sunil-bhai's presence in the dressing room was a big miss against Qatar. He's the leader of the team. We were feeling bad for him because I know how badly he wanted to play. But that's life, and that's football."

Jhingan said India will have to win against Bangladesh and Afghanistan before thinking of "surprising" Oman in the away match next year.

"Moving on, we need to be realistic. The forthcoming matches in October and November are too crucial. If we don't win against Bangladesh and Afghanistan and manage away points from the Oman game, this point won't matter much.

"To value this hard-earned point, we need to win our other games. We are getting better as a team, and as individuals. If we keep working like this, the sky is the limit for this batch."