Sunday’s result could prove fatal to Getafe’s hopes of qualifying for the Champions League for the 1st time as they dropped to 5th. 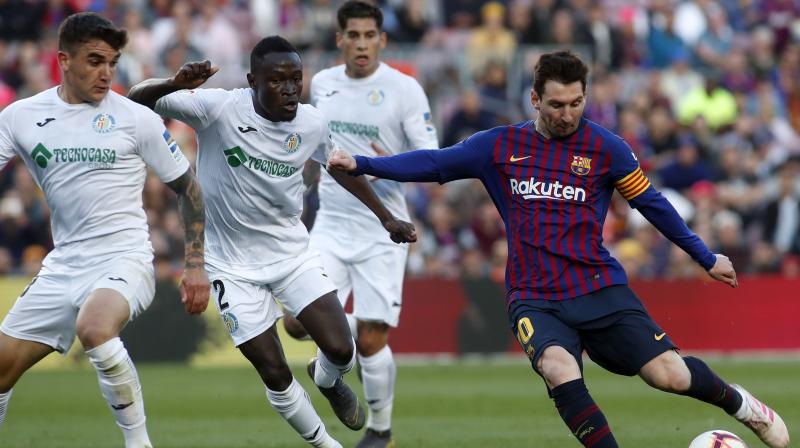 Valencia leapfrogged Getafe into fourth due to their superior head-to-head record after beating Alaves 3-1 and will snatch the final Champions League spot if they win at Real Valladolid in their final game of the season next week. (Photo: AP)

Barcelona: Spanish champions Barcelona beat top-four chasing Getafe 2-0 in front of a subdued and near half-empty Nou Camp on Sunday in their first Liga game since a humbling defeat by Liverpool sent them crashing out of the Champions League semi-finals.

Sunday’s result meant little to Barca, who clinched an eighth Liga title in 11 seasons two weeks ago, but it could prove fatal to Getafe’s hopes of qualifying for the Champions League for the first time as they dropped to fifth.

Valencia leapfrogged Getafe into fourth due to their superior head-to-head record after beating Alaves 3-1 and will snatch the final Champions League spot if they win at Real Valladolid in their final game of the season next week.

Barcelona’s Chilean Arturo Vidal opened the scoring near the end of the first half, poking a loose ball home after Gerard Pique’s flicked header was parried by Getafe keeper David Soria.

Barca’s second came in the 90th minute thanks to an own goal after captain Lionel Messi combined with Sergi Roberto and beat two players before his shot got a final touch off Mauro Arambarri.

Only 57,000 people turned up at the 99,000 capacity ground, which turned into a forum for fans to vent their frustrations at Barca’s 4-0 second-leg surrender at Anfield on Tuesday as they went out of Europe’s elite club competition 4-3 on aggregate.

Forward Philippe Coutinho suffered the bulk of the whistles and boos after his poor display against his old club Liverpool, while veteran midfielder Sergio Busquets was also subjected to boos when he misplaced several passes in the first half.

Coutinho’s day got worse when he was forced off injured in the second half.

A statement from Barca said the Brazilian had strained his hamstring and would be out for 10 days, meaning he will miss their final league fixture against Eibar. He is set to return two days before the Copa del Rey final against Valencia.

Busquets said the defeat by Liverpool was the lowest point of his career and made it more difficult to play against Getafe.

“The last few days have been very tough but we wanted to get out of this deep hole we have been in, we have to face the fans, they showed their anger but we have to move on now,” he said.

“We are all feeling very low. I have lost trophies and matches but I never had to deal with something like this (the defeat by Liverpool). It’s difficult for everyone although it’s part of the sport. We will all move on together.”

Barca have one final league game at Eibar next week before facing Valencia in the Copa del Rey final, when they can secure a second successive double although it still might not be enough to keep coach Ernesto Valverde in his job.

The defeat at Anfield may also lead to several players leaving the club but Busquets urged the Barca directors to carefully weigh up any decisions.

“I think you should evaluate things at the end of the season and consider everything that has been achieved,” he added.

“We are all united, the players and the staff. There will be debates, but the players won’t be involved. It’s difficult to know what is the best thing for the club but we shouldn’t lose our heads, we must trust each other.

“When the season is over decisions will be made but until then we must stick together, do our own thing and focus as much as possible on the Copa del Rey final.”