Sports   Football  13 May 2019  Ajax on the verge of winning Eredivisie
Sports, Football

Ajax on the verge of winning Eredivisie

Klaas-Jan Huntelaar equalised for Ajax on 15 minutes before Van de Beek put the Amsterdam giants 2-1 ahead in first-half stoppage time. 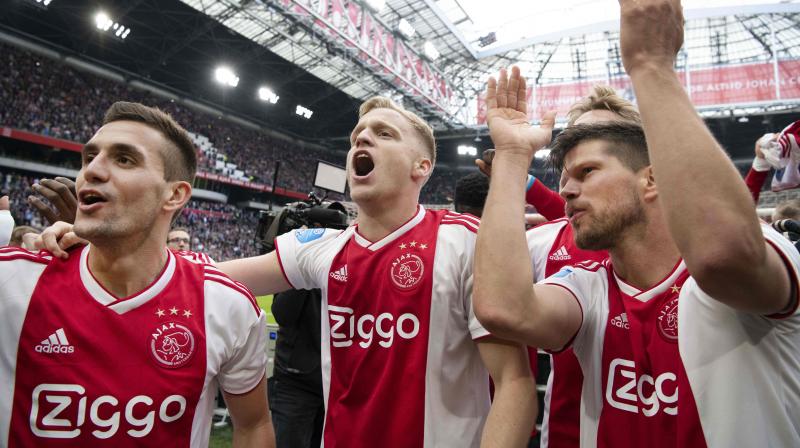 Ajax round out the season with a trip to second-bottom De Graafschap on Wednesday while PSV host Heracles. (Photo: AFP)

The Hague: Ajax shook off their midweek Champions League heartbreak and recovered from falling behind to a first-minute goal on Sunday to beat Utrecht 4-1 and move to the brink of the Dutch title.

Othman Boussaid stunned the hosts, who were denied a place in the Champions League final on Wednesday by a 96th-minute goal when he fired Utrecht ahead after just 36 seconds at the Johan Cruyff Arena.

Dusan Tadic sealed the win with two late goals, the second from the penalty spot, to push Ajax to the brink of a record 34th league title, the club's first since 2014.

Erik ten Hag's side are three points clear of PSV Eindhoven and have a far superior goal difference ahead of the final round of games after the defending champions lost 1-0 at AZ Alkmaar.

Ajax round out the season with a trip to second-bottom De Graafschap on Wednesday while PSV host Heracles.