The win lifted Gokulam from the bottom, past Chennai City on better head-to-head count as the Kerala outfit secured their fourth win from 13 matches. 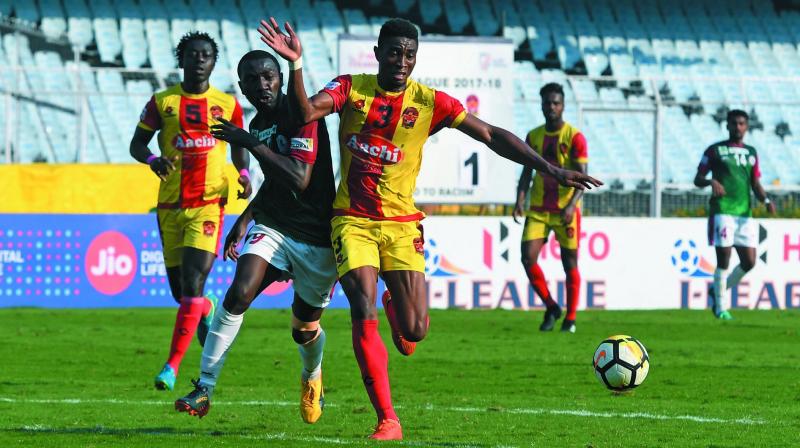 Action from the Mohun Bagan-Gokulam Kerala FC match in the I-League.

The Ugandan earlier set up Mahmood Al-Ajmi’s goal in the 77th minute before Mohun Bagan took less than a minute to restore parity through leading scorer Dipanda Dicka who brought up his ninth goal with a header.

Just when it was meandering towards a draw, a high-class volley by Henry handed Bagan the heartbreak as the 2015 champions signed off their campaign at home with a shock defeat that will haunt them.

It was Mohun Bagan’s second defeat at home against two bottom-placed teams, leaving them virtually out of title race with four matches left.

The win lifted Gokulam from the bottom, past Chennai City on better head-to-head count as the Kerala outfit secured their fourth win from 13 matches.

Minerva up for EB
In Panchkula, league leaders Minerva Punjab welcome East Bengal in a potential title-deciding clash. The match at the Tau Devi Lal Stadium is a special affair for both coaches, Khogen Singh and Khalid Jamil, who were former teammates in Air India and are now vying to outwit each other.

It’s a must win for Khalid Jamil’s boys, who are sitting on 23 points in 13 matches, six points behind their opponents and title favourites Minerva who are on 29 points in as many matches.

Minerva Punjab, on the other hand, will be cautious not to drop points that could shake their title hopes.