The Indian cricketer is the first-ever non-footballer brand ambassador appointed by LaLiga globally. 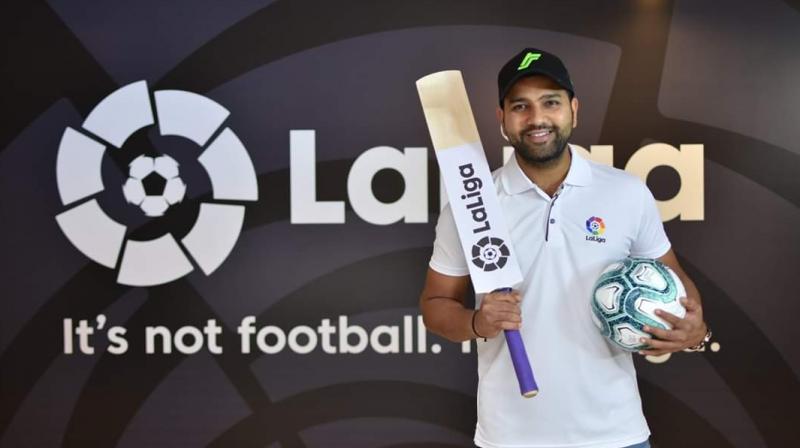 The Indian cricketer is the first-ever non-footballer brand ambassador appointed by LaLiga globally and will be the face of the league in India.

"Football in India is in its global growth trajectory and it is heartening to see that it is no more considered as the 'sleeping giant'. Over the course of the past five years, we have witnessed significant growth in the interest for football in India. Credit must be given to everyone associated with it, including the fans," said Rohit.

"I am truly delighted to be associated with LaLiga. It's encouraging to see the Spanish giant have made inroads into the Indian football ecosystem through their grassroots programme. Personally, I see this as an interesting journey for me into the beautiful game with LaLiga. I look forward eagerly to connecting with the football fans in India," he added.

LaLiga has made focussed efforts in India since 2017 to nurture the sport and build the brand in the country. In the two years since LaLiga opened its office in India, the league has undertaken several key initiatives like LaLiga Football Schools, a pioneering broadcast partnership with Facebook to provide all 3000 matches for free for the Indian audience.

"India is a very important market for Laliga from a global perspective, we came here in 2017 to get a better understanding of the pulse of the nation. Over the past two years, and after several ground-breaking initiatives, it is obvious that India has a huge appetite for football," said Jose Antonio Cachaza, Managing Director, LaLiga India.

"Rohit Sharma is the perfect example of this, in spite of being the most renowned face in Indian cricket right now, he is also an ardent football and LaLiga fan," he added.

Rohit during the event also said that World Cup-winning skipper Mahendra Singh Dhoni is the best in the business when it comes to playing football.

"MS Dhoni is the best footballer in the Indian Cricket team," said Rohit.