The result ensured India’s progression to the main draw of the AFC Asian Cup football tournament 2019 in the UAE for the first time since 2011. 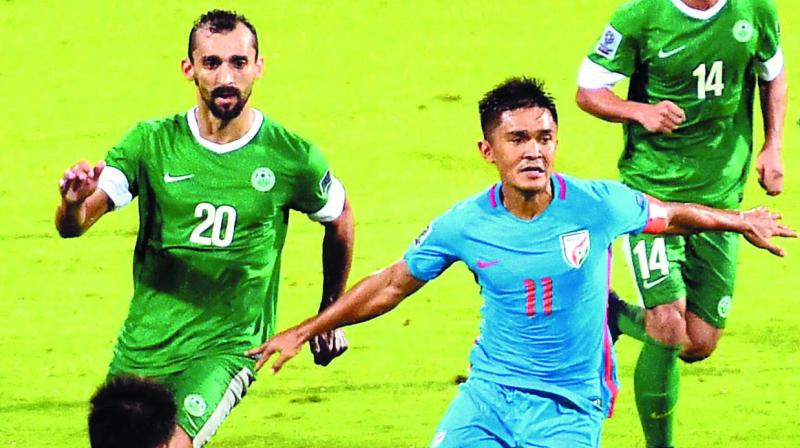 India’s Sunil Chettri (right) in action against Macau in their AFC Asian cup qualifier at the Kanteerava Stadium in Bengaluru on Wednesday. The hosts won 4-1. (Photo: PTI )

Bengaluru: The rain-soaked atmosphere at the Sree Kanteerava Stadium was in marked contrast to India’s spirited performance as they registered a comprehensive 4-1 win over challengers Macau on Wednesday. The result ensured India’s progression to the main draw of the AFC Asian Cup football tournament 2019 in the UAE for the first time since 2011.

India got a handle of the inclement conditions, putting the Macau defence under pressure right from kick-off. Skipper Sunil Chettri found himself felled by opposition centre back Lao Kin in front of the box in the 20th minute, and blazed his ensuing free-kick over the bar.

The Blues were looking to emulate their 2-0 win in the corresponding fixture and paid heed to coach Stephen Constantine’s pleas for a fast start, when they took the lead in the 28th minute.

Full back Narayan Das threatened to impact from the left flank all evening and duly found Jeje Lalpekhlua who in turn found an unmarked Rowlin Borges, whose deflected strike found its way past the flailing keeper.

Macau attempted to force the issue with a formational change to create more width. It worked a treat as Lei Hou played a beautiful ball that met the head of Nicholas Torrao, who crept between Sandhesh Jhingan and right-back Pritam Kotal to nod home the equaliser.

Half time passed by, and Constantine brought on the match-winner from the last fixture Balwant Singh, hoping to make a mark instantly. The substitution yielded a goal when all three forwards combined to put the ball in the back of the net. Jeje took advantage of some sloppy ball handling form Macau to feed Balwant, who squared for Chettri’s tap-in in the 60th minute.

It was smooth sailing from there on as India were handed a two-goal advantage, when Lam Seng found his clearance loop off his boot and over the hapless goalkeeper Ho Fai for a fortuitous own goal.

With the issue all but sealed, Salam Ranjan Singh made his debut at the back in the 77 th minute. The Macau men charged forward to salvage some pride, but were left exposed as Jeje was found by Chettri to prod home a fourth, finishing the game with aplomb.