India lost 0-3 to giants USA in the opener and then 1-2 to Colombia in their Group A matches. 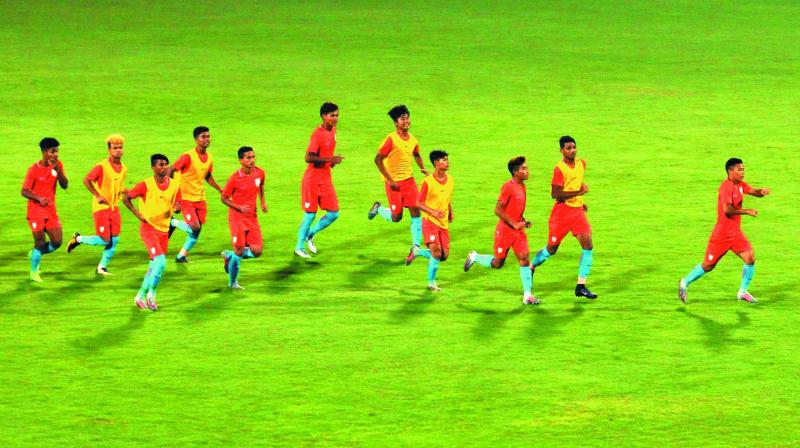 Indian players at a practice session in New Delhi on Wednesday ahead of their Fifa Under-17 World Cup Group A match against Ghana. (Photo: Pritam Bandyopadhyay)

New Delhi: Sport has a way of enthralling spectators. Sometimes, it’s not the winner but the underdog, the performer who gives his heart and sweat in defeat, who captures hearts and minds alike.

India’s Under-17 football team’s story in the World Cup at home has been that and much more as they have carried the dream of a billion countrymen on the biggest stage of all. In a mere six days, they have given the nation the courage to dream, appealed to their emotions with brave displays and in a way, laid the cornerstone for future generations. Numbers reflect a different story though.

India lost 0-3 to giants USA in the opener and then 1-2 to Colombia in their Group A matches. On Thursday, at the Jawaharlal Nehru Stadium here, thousands will gather to see India chase an improbable dream when they take on a sturdy and tactically superior Ghana in their final group game.

Qualification to the next round is a distant dream and perhaps, this will be the last time this sprightly bunch — who made history by becoming the first team from the country to take part in a Fifa World Cup at any level — will take the field at the showpiece event, and on home soil. But what they could not deliver in results so far, they did convincingly with passion and spirit.

They have displayed guts, nerves of steel and above all, a game sense and fight that belies the fact that this is India’s first-ever participation in a World Cup finals. There have been errors, lapses and moments of complete disarray, but among those have blossomed future stars who shown talent and gumption in plenty.

Goalkeeper Dheeraj Singh, who gave up badminton for football in his early years, has registered himself as a safe pair of hands. It was his brilliant form that saw India hold the upper hand in the initial stages against Colombia. Jeakson Singh has gone into the history books as the country’s first to register his name on a Fifa matchsheet with a stunning header; skipper Amarjit Singh has led with example channelising his young army beautifully, while Rahul K.P. and Suresh Singh too have impressed.

Mathematically, India have a remote chance of advancing to the next round. They need to beat twice champions Ghana by a big margin and then hope that USA beat Colombia too. In a format that sees the top two teams from each of the six groups qualify, along with the four next-placed teams, India have an outside chance.

On paper, they are no match to their opponents. Ghana have returned to the Under-17 Cup after 10 years, but carry a rich history.

The ‘Black Starlets’ are among the five highest scoring teams in the tournament’s history and will be itching to get three points on the morrow, following a 0-1 loss to USA in their previous encounter. They beat Colombia 1-0 in the opener. But going by India’s display in the last two games, Ghana know it will not be an easy match.

The hosts will have a lot on their minds. In 24 hours from now, they could be on their way to making more history by advancing to the knockouts, or packing their bags not knowing when or if they will get another chance to feature in a global event.

In either case, there will be plenty to gain for this young, unknown team of 21, a few of whom are now known faces. For coach Luis Norton de Matos and his support staff, there will be time to look into the plusses and minuses of it all, but for now they have a job in hand.

It is time to put the “little experience” of the first two matches to good use, along with the spirit and doggedness shown so far, into their final group stage match on Thursday.
Bring on Ghana!