It seemed a one-way traffic for the English youngsters but El Tri made a sensational comeback with a stunning brace by Diego Lainez (65th, 72nd). 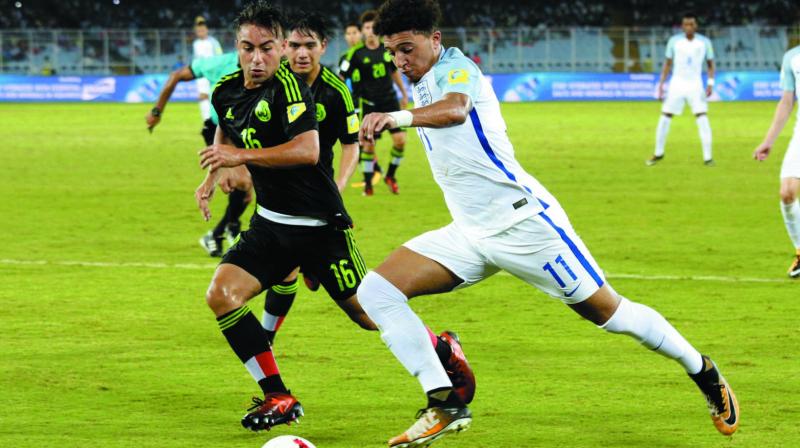 Kolkata: England prevailed over two-time champions Mexico 3-2 to seal a Fifa U-17 World Cup pre-quarter-final berth with yet another dominating show here on Thursday.

It was a feast for the eyes as the 40,620 spectators who turned out at the Salt Lake Stadium and witnessed the five-goal thriller with England dominating the first one-hour, followed by Mexico’s second half resurgence. After some hits and misses in the first 30 minutes, Liverpool youngster Rhian Brewster curled in a 39th minute free-kick to break the stalemate.

Brilliant with his pace and movement, Philip Foden finally found his name in the scoreline when he doubled the lead four minutes after the break, while the Young Lions star player Jadon Sancho earned a penalty and converted it in the 57th minute for his third goal in the tournament.

It seemed a one-way traffic for the English youngsters but El Tri made a sensational comeback with a stunning brace by Diego Lainez (65th, 72nd).

Iraq inch closer
Striker Mohammed Dawood scored a double as Iraq thrashed Chile 3-0 in Group F, to close in on the knocksouts berth.

Iraq now have four points from two matches, following a 1-1 draw with Mexico in the opening game. Dawood opened his account in the sixth minute, and added another in the 68th minute. Chile added to their misery when Diego Valencia netted an own goal, for a 3-0 verdict in Iraq’s favour.