The midfielder scored one goal and provided one assist to win the game for his side. 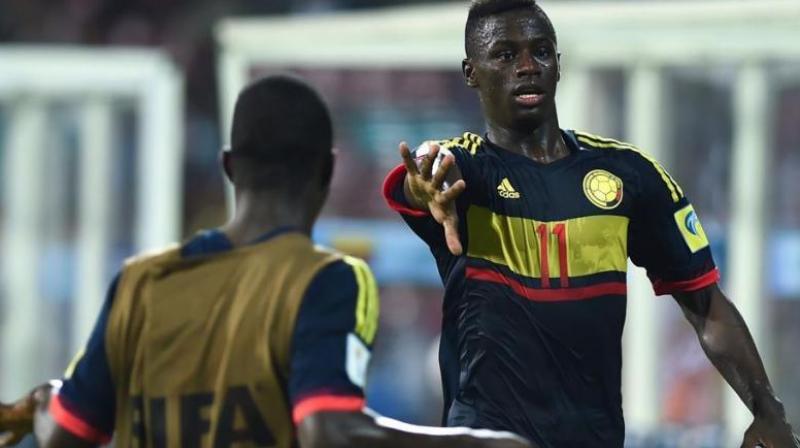 Navi Mumbai: Juan Penaloza once again proved to be the match winner for Colombia as they beat table toppers USA  in the final Group A game of the FIFA U-17 World Cup played at DY Patil stadium in Navi Mumbai. Penaloza who scored the winning goal against India in their second game once again delivered a fabulous performance in the match with a goal and assist to his name.
Colombia took the lead in the 3rd minute. Juan Vidal opened the scoring as US defenders were unable to clear the ball near the goal post from a throw by  Andreas Cifuentes.  Vidal slotted the ball into the goal after being left unmarked inside the box.

USA equalised in the 24th minute through George Acosta . Andrew Carleton cross from the right side went straight to Acousta who was left unmarked by Colombian defence. The midfielder’s right footed shot from the centre of the box went into the goal.

Colombia who dominated the possession in the first half came close to increasing their lead in the 29th minute, Juan Penaloza left footed shot missed the left side of Justin Garces goal.

USA  came close to taking the lead in the 37th minute when captain Josh Sargent’s  freekick took deflection of Colombian wall and missed the goal by few meter before going out for a corner. At the end of the first half, both the teams were locked at one goal apiece.

The second half seemed no different as both the teams looked for goals, but it was Colombia who look threatening as they tried to create goal scoring chances, but US defence stood firm not allowing opposition players to take a shot.

Colombia’s Andres Perera tried his luck in the 60th minute, but his shot from outside the box was pushed away for corner  US keeper Justin Garces.
The South American side finally took the lead through  Juan Penaloza who  scored with a stunning freekick to give Colombia the lead in the 67th minute.

Etilso Martinez was fouled outside the box by US defender, Penaloza right footed shot dipped over US keeper Garces and went to the bottom right corner. Colombia substitute Yadir Meneses came close to scoring the third goal in the 71stminute, but his left-footed shot was brilliantly saved by Justin Garces who tipped the ball over the goal.

Deiber Caicedo scored the third goal in the 87th minute to seal the deal for Colombia. After scoring the second goal Penaloza provided the match-winning assist. The star midfielder delivered the cross from the left-hand side which went to unmarked Caicedo on the other side of the goal. The striker smashed the ball through the legs of US keeper causing wild celebration among players.

With this win, Colombia, Ghana and USA finished with 6 points apiece in the group standings. Ghana finished on top with better goal difference, while Colombia finished second as they beat USA in the final game.

USA who were leading the group before this match finished third. In spite of this defeat, they still qualify for the knockout stage as the best third place team.