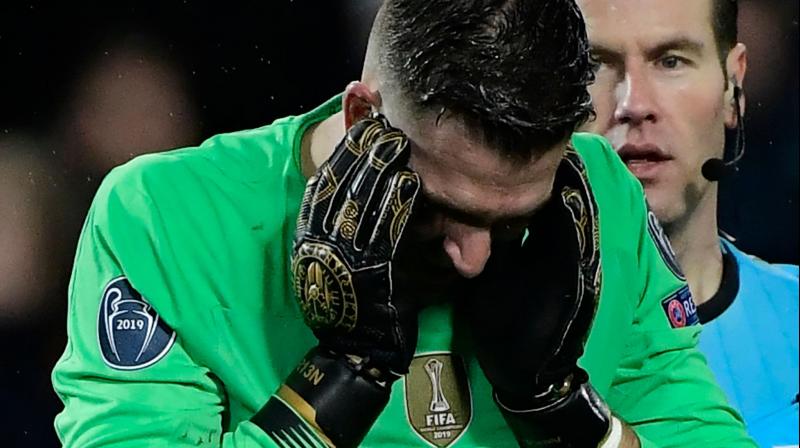 NOWHERE TO HIDE: Liverpool's backup goalkeeper Adrian reacts after letting in three goals in extra time against Atletico Madrid in their UEFA Champions League Round of 16 second leg match at Anfield in Liverpool, north west England, on Wednesday. AFP Photo

Liverpool: Anfield was rocking. Jurgen Klopp was beating his chest and punching the air. Another famous comeback was on for Liverpool in the Champions League.

One error from their backup goalkeeper saw it all come crashing down for the titleholders on Wednesday. When Adrian received the ball at his feet seven minutes into extra time, Liverpool had just gone 2-0 ahead on the night and 2-1 up on aggregate against Atletico Madrid in the round of 16. The Reds just needed to keep their composure to see the game through.

Instead, Adrian side-footed a poor clearance along the ground and straight to Joao Felix, who set up substitute Marcos Llorente to score the crucial away goal that put Liverpool on the back foot for the first time.

Further goals from Llorente and Alvaro Morata -- two former Real Madrid players -- secured a 3-2 win for Atletico and a 4-2 win on aggregate.

''Conceding a goal is part of football and shouldn't have a massive influence,'' Klopp said of Adrian's error. ''But, in this moment, the momentum changed.''