Real Madrid maintained a one-point lead at the top of La Liga with a win over Osasuna while Barcelona hit Alaves for six. 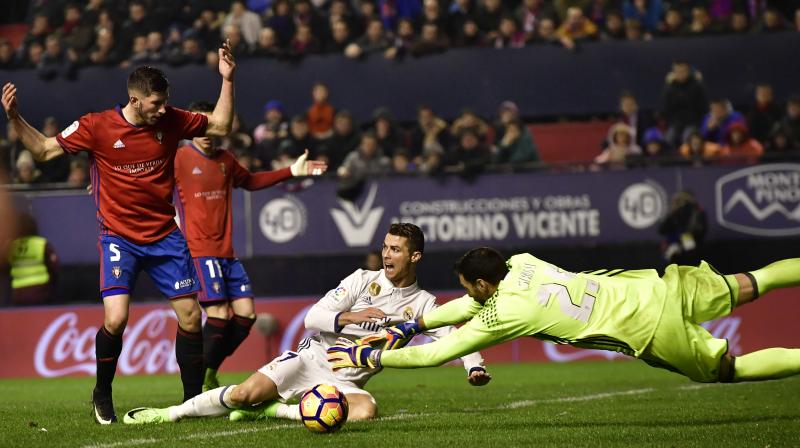 Madrid: Real Madrid maintained a one point lead over Barcelona at the top of La Liga as Cristiano Ronaldo was on target in a hard fought 3-1 win at rock bottom Osasuna on Saturday.

Earlier, Barca's front three of Lionel Messi, Luis Suarez and Neymar all struck in a 6-0 thrashing of Alaves.

Madrid also have two games in hand on their title rivals.

However, both games were overshadowed by horrible injuries as Barca's Aleix Vidal suffered a dislocated right ankle that will keep him out for five months and Osasuna's Tano Bonnin a double leg fracture.

"There is no such a difference (between the sides). It is true it was the leader against last in the table, but you have to play the games and the opponents always make it difficult against Madrid," said Real boss Zinedine Zidane. "We have to suffer, but in the end we got what we came for."

The game at El Sadar was only 15 minutes old when Bonnin came off worse in an innocuous looking challenge with Isco to the visible shock of players on both sides.

Osasuna had started on the front foot, but suffered a further blow nine minutes later when Karim Benzema's through ball found Ronaldo and the World Player of the Year's drive from a narrow angle had too much power for Salvatore Sirigu.

The hosts responded in style just after the half hour mark when Sergio Leon broke into an ocean of space behind the Madrid defence before producing a cool chip over Keylor Navas to level.

Navas then made brilliant saves from Emmanuel Riviere and Leon either side of half-time to keep Madrid on level terms.

And eventually their extra quality shone through when Isco latched onto a loose ball inside the area and slotted into the far corner just after the hour mark.

Madrid should have gone onto win by a more comfortable margin as Sirigu made a fine save from Ronaldo before the Portuguese and Lucas Vazquez had strong claims for a penalty waived away.

However, Vazquez made the points safe with a measured dink over Sirigu in the final minute of stoppage time.

Barca's success was also soured by violent clashes between fans outside the ground before kick-off which left one supporter in hospital with serious head injuries.

"I go away with very good feelings from the football perspective, for the result and the way we achieved it," said Barca boss Luis Enrique. "But I am upset by Aleix's injury, the way it came about and what it means for him."

Barca confirmed Vidal underwent surgery on Saturday night that will keep him out for the rest of the season.

On the field, Enrique rotated his squad once more with six changes from Tuesday's 1-1 draw with Atletico Madrid that secured their place in a fourth consecutive Cup final.

However, despite a trip to Paris Saint-Germain upcoming on Tuesday, Messi, Suarez and Neymar were all included and ran riot.

The visitors had goalkeeper Marc-Andre ter Stegen to thank for not going behind early on with a brilliant one-on-one save from Theo Hernandez.

There was no doubt over the outcome once Barca went in front thanks to a fine team move finished off by Suarez from close range eight minutes before half-time.

A goalkeeping error from Fernando Pachecho allowed Barca to double their lead three minutes later as he punched a loose ball off Suarez's head and the ball rebounded for Neymar to tap into an empty net.

The champions hit top form after the break with four further goals in eight minutes. Messi drilled his 34th goal of the season low past Pacheco just before the hour mark.

The Argentine was then played in by Suarez, but the last touch came off Alaves defender Alexis to make it 4-0.

Ivan Rakitic blasted home the fifth from Suarez's cut-back before the Uruguayan rounded off the rout himself after Pacheco had parried Neymar's initial effort.

Elsewhere, Athletic Bilbao moved up to seventh with a 2-1 win over Deportivo la Coruna, whilst Betis and Valencia played out a 0-0 draw.