Fifa Under-17 World Cup: Lincoln, Paulinho win it for Brazil

The best chance in the session came in the second minute but Lincoln failed to beat the goalie as his angled shot was blocked. 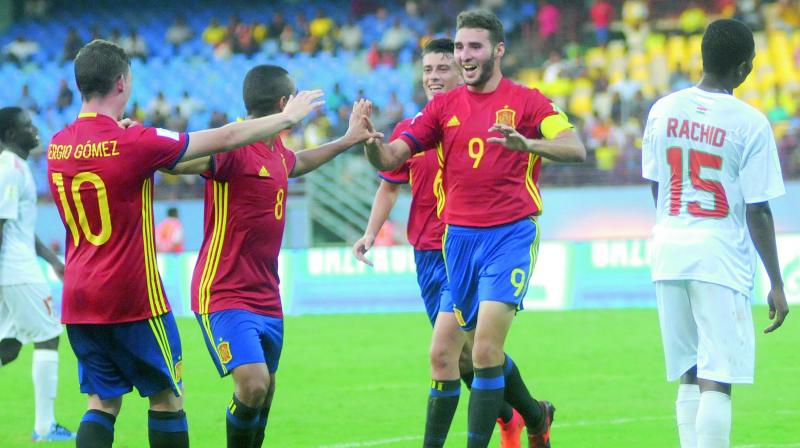 Kochi: Tight matches need a moment of magic or luck and rising star Lincoln provided the spark to help Brazil defeat DPR Korea 2-0, in a Group D match of the U-17 World Cup at the Jawaharlal Nehru Stadium here on Tuesday.

Lincoln broke the deadlock after a frustrating 55 minutes for Brazil and Paulinho, another upcoming star from Sambaland, sealed the victory and sent DPR Korea out of the tournament.

Brazil had several weapons in their inventory but they looked blunt in the first half. The best chance in the session came in the second minute but Lincoln failed to beat the goalie as his angled shot was blocked.

Thereafter, the Koreans defended with nine players while Brazil’s forwards found it hard to even reach the penalty box with the ball. They tried everything — crosses, one-touch football, decoy runs, dribbling, and long balls — but nothing worked against the determined Koreans.

Paulinho had his chances but the speedy forward shot it wide couple of times while Brenner hit the outside of the net to end the first half bleakly for the Brazil and their fans.

A set-piece broke the deadlock as Weverson’s kick hit the wall but managed to pass through and Lincoln with a poacher’s instinct pounced on the ball. Soon came the second goal and it saw all three forwards teaming up. Lincoln received from Paulinho passed quickly to Brenner who found the unmarked Paulinho with a sumptuous through ball. Paulinho had only to angle his shot away from the goalie to make it 2-0.

SPAIN REBOUND FROM OPENING LOSS
Spanish coach Santi’s decision to include players from Real Madrid and Barcelona FC academies paid dividends as they blanked a sorry Niger, 4-0 to boost their knockout stage hopes.

Highly-rated Barcelona B forward Abel Ruiz scored a brace while club mate Sergio Gomez and Real Madrid academy player Cesar Gelabert scored the others to secure their first victory in the tournament after their loss in the opening match to Brazil.

Spain were in need of a win to lift morale and Santi had made it clear that it was a must-win game before the match. The starting line-up reflected this mood as he made three changes from the previous match.

Real Madrid academy midfielder Antonio Blanco and Barcelona left back Juan Miranda were brought in while Santi shored up his attack by including Real Madrid forward Gelabart. There were four players each from Real Madrid and FC Barcelona while Valencia CF contributed the other two players.

Miranda’s inclusion was the most important decision as his understanding with club mates Gomez and Ruiz helped create most chances. Miranda’s assist for the opening goal was a delightful one as Ruiz buried it calmly to give Spain the lead in the 21st minute.

The left-back would have also found himself on the score sheet but was not able to covert two chances — a free header that fell on top of the net while the other in the second half forced the Niger goalie into a diving save.

Gomez also played a role in the annihilation of the Africans as his free kick, from near the box, paved way for the second goal. Instead of an orthodox kick Gomez’s decision to pass the ball to Ruiz surprised the Niger defenders and the captain gave his team a 2-0 lead.

Ruiz may well have had a hat-trick but blasted his shot over the woodwork. Another shot in injury time was punched away by the goalie but Gomez collected it and passed to Gelabart, who nicked the ball into roof of the net to make it 3-0 before half-time. Gomez added a fourth in the 82nd minute and coach Santi left the ground smiling.