The Asians were powered by Younes Delfi’s early brace and pumped in an additional two goals in the second half to seal a berth in the round of 16. 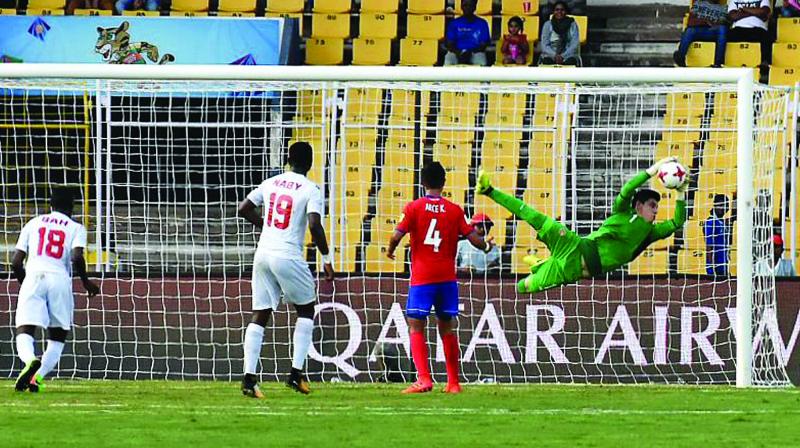 Action from the Group C between Costa Rica and Guinea at the Jawaharlal Nehru Stadium in Goa on Tuesday. The match ended 2-2. (Photo: PTI)

Margao: Iran pulled off the result of the nascent Fifa Under-17 World Cup, hammering Germany 4-0 in a Group C game at the Pandit Jawaharlal Nehru Stadium here on Tuesday.

The Asians were powered by Younes Delfi’s early brace and pumped in an additional two goals in the second half to seal a berth in the round of 16.

Iran dominated an off-colour German side and had all but sealed the match in the opening 45 minutes itself. Delfi opened the scoring in the sixth minute before striking the crossbar with a free-kick nine minutes later.

If it was not for goalkeeper Luca Plogmann, Iran may been a few more goals up by the break as Delfi and Allayahr Sayyad caused the bigger-built Europeans constant problems. Delfi converted a free-kick in Germany’s six-yard box for a deserved two-goal lead minutes before half time.

Four minutes after the break, Sayyad dived to head home a precise cross from Delfi for a three-goal lead before substitute Vahid Namdari capped a counter-attack to complete an emphatic result for Iran with 15 minutes left on the clock. For a woeful Germany, there was no way back.

Costa Rica, who played a waiting game keeping their defence compact, took the lead in the 26th minute through Yecxy Jarquin.

Costa Rica once again took the lead after the change of ends through Andre Gomez taking advantage of the shaky rival defence in the 67th minute. But the Africans kept pressing until defender Ibrahima Soumah scored the equaliser in the 81st minute.

The draw kept both the teams’ hopes alive as they have one point each. Costa Rica play their next match on October 13 here against Iran while Guinea travel to Kochi to play their last match against Germany.