Police were called after an incident between the two men and private security staff at Ozil's house, Goal.com reported on Saturday. 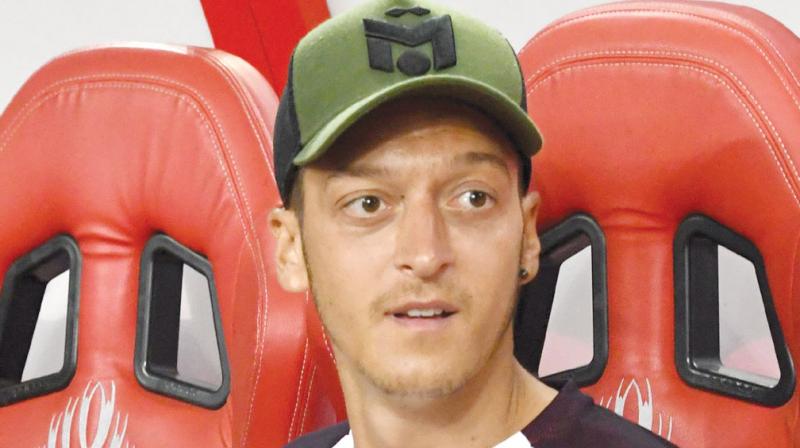 The individuals were then taken to a police station where they have been charged under Section 4a of the Public Order Act. (Photo: File)

Leeds: Two men were arrested outside midfielder Mesut Ozil's house after the latest security scare for the Arsenal's star.

Police were called after an incident between the two men and private security staff at Ozil's house, Goal.com reported on Saturday (local time).

The individuals were then taken to a police station where they have been charged under Section 4a of the Public Order Act.

Both men will now appear in court next month.

"Two men have been charged under Section 4a of the Public Order Act following an incident in Camden on Thursday, 8 August," Goal.com quoted the statement from Metropolitan Police.

"Ferhat Ercan, 27, of Highgate, and Salaman Ekinci, 27, of Tottenham, were charged on August 9 following the incident and are due to appear at Highbury Corner magistrates' court on 6 September," the statement added.

Earlier, Arsenal had announced that both Ozil and Sead Kolasinac won't be taking part in the team's opening Premier League match against Newcastle United due to further security incidents which are being investigated by police.

Earlier, the 30-year-old Ozil was chased in Golders Green, North London when a gang surrounded his black jeep around 5 p.m. (local time) on July 26, Anadolu Agency had reported.

Ozil was with his teammate Kolasinac when the incident had taken place.

Leaving his car behind, Ozil ran into a Turkish restaurant fearing for his life after Kolasinac attempted to take on one of the assailants.

Waiters and chefs from the Likya restaurant rushed to the aid of the football stars, forcing the gang to flee empty-handed.

carjacking, saying, "We have been in contact with both players and they are fine."

"Police were called to Platts Lane, NW3, shortly before 5 p.m. (local time) on Thursday, July 25 to reports of an attempted robbery," a police spokesperson had said.